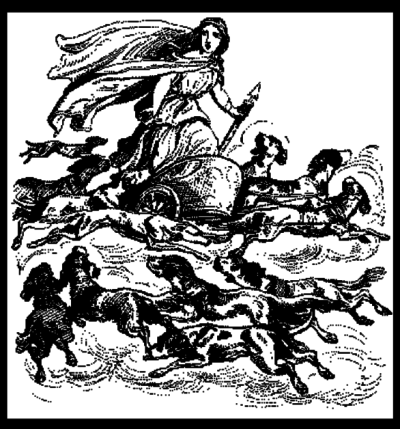 There’s a reason the Norwegian Buhund has earned the nickname, “the friendly spitz.” Outgoing, curious and eager to please their people, this ancient breed that traveled with the Vikings was honored by that culture by being included on the final journey to Valhöll (Valhalla) with their deceased owners. A ninth century Viking grave excavated in Gokstadt, Norway revealed the skeletons of six dogs believed to be Buhund ancestors.

While the Viking Age art depicted many dogs, scenes depicting the arrival of a slain warrior into Valhalla and greeted by a Valkyrie were more frequent. These female figures of Norse mythology chose who was permitted to die in battle, and who wasn’t. They greeted the warrior with a horn of mead, and behind her waited the warrior’s faithful dog. The Vikings didn’t appear to be able to imagine an afterlife in which their dogs weren’t around, so in that regard, we suppose we’re all Vikings.

Image of a modern depiction of Frigga, an Old Norse goddess, in her chariot pulled by faithful dogs