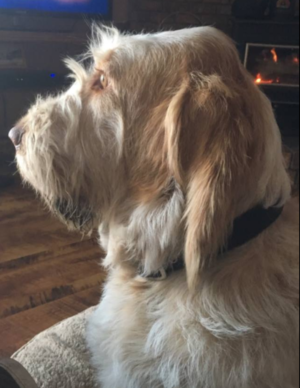 During our Purebred of Interest feature on the breed in 2018, someone shared their opinion that a very typical rustic Spinone Italiano head, once seen, is hard to forget, and for good reason. This is a singular head.

To begin, the profile of the Spinone is unusual. The upper longitudinal profiles of the skull and muzzle are divergent and down- 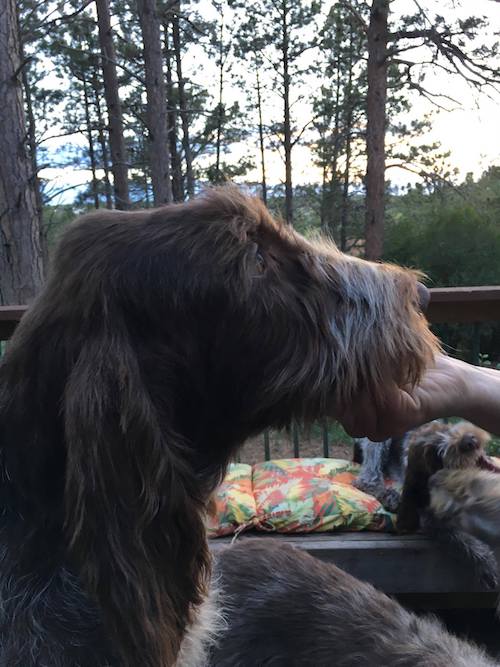 faced, and if extended, the top line of the muzzle emerges in front of or tangential to the occipital. Indeed, a description of the Spinone head as “dolicocefale” (from Greek: long head) appeared as early as 1897. The occipital protuberance (the prominence of the eye sockets) is also important as they help frame the expression created by positioning of the eyes as described by Bosisio, Brunetti and Rezza of the Italian Kennel Club in 1928. A few years later, Brianzi and Ullio of the Societa Amici dello Spinone added: “Following the upper line of the muzzle, this must pass over or around the eye socket, never below it.” These head planes are so critical to breed types that the AKC breed standard indicates that a dish-faced muzzle is to be “faulted so severely as to eliminate from further competition.”

The cheeks are lean, and the medial-frontal furrow is very pronounced. While the stop is barely perceptible, the bridge of the muzzle is straight or slightly Roman, and it ends in a marvelously large, bulbous and spongy nose with a rounded upper edge. In fact, the nose (in profile) protrudes past the forward line of the lips, and in brown-and-white or brown-roan dogs, the nose pigment is rosy flesh colored, while in solid white dogs, it can be flesh colored or brown, and anywhere in between.

We were fortunate to have several owners share pictures of their dogs to illustrate these points, and our thanks go to Deb Davenport (whose photo is seen at the right), and Paolo Rizzon whose dog is our thumbnail image.

One thought on “Once Seen, Hard to Forget”