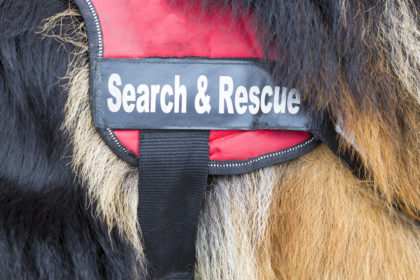 (FEMA) deployed 80 dogs as members of 20 certified urban SAR teams to support the rescue operation in New York on 9/11. Five other FEMA teams responded to the Pentagon site. The only other occasion for similar use of dogs for SAR (Search and Rescue) efforts was the Oklahoma City bombing disaster, and do you know what breed was the first to be deployed there?

The first FEMA dog deployed to the rubble of the Oklahoma City bombing at the Murrah Building on April 19, 1995 was a Belgian Tervuren named, “Topper” (Snowflower Maine Topper, CDX) bred by Carmen Helgesen and owned by Pat Grant, DVM. For this, Topper was awarded the 2002 ACE (AKC Award for Canine Excellence) in Search and Rescue, and he was honored at the 2002 American Belgian Tervuren National Specialty  when he received the Tervuren Club President’s Award. The American Belgian Tervuren Club further recognized Topper as a stellar representative of the breed by including his picture in the “Personality and Temperament” section of their judges’ education Web pages. 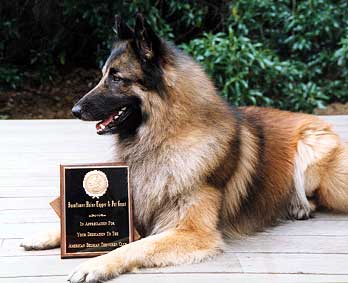 Topper had joined the FEMA Urban Search and Rescue Task Force as a Type-1 disaster dog in 1993. He began his US&R career in the rubble of the Murrah Building, but his special skill set was also used when a massive block of granite with an estimated volume of 78,000 cubic yards detached from the cliff between Washburn Point and Glacier Point, in Yosemite Valley in 1996. Topper’s last US&R assignment was at Ground Zero at the World Trade Center site in New York. His owner, Pat Grant, said, “As one of the most experienced FEMA dogs responding, Topper again gave generously of his mature confidence and enthusiasm to help bring closure to a terrible tragedy.” It wasn’t unusual to see dispirited firefighters and rescuers being comforted by Topper when they weren’t working.

To the people who shrug their shoulders and say that extinction for a breed is inevitable, and even okay, when its traditional role no longer exists, we point to Topper, a herding breed dog. We doubt that in America, anyway, Tervs are used to herd sheep these days, but as Topper proved, our breeds can be versatile, and are easily repurposed.