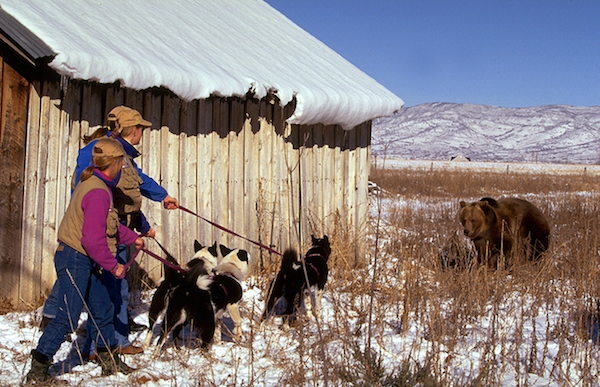 The Karelian Bear Dog is no more related to a bear than the Otterhound is to an otter, but we couldn’t resist opening with this after we overheard a child ask the owner of the breed if this was the case.

While not a bear, the Karelian Bear Dog is Karelian. Karelia is a region of Northern Europe, a federal subject of Russia. It has been described as a remarkably beautiful land of white nights, boundless forests, and blue lakes, and it is in this setting that Karelians  (a distinct ethnic group considered a subset of Finns) hunted with spitz type dogs closely related to the Russo-European Laika. Historically used to bring down elk, moose, boars and bears, the KBD today is one of the top ten most common breeds in Finland, but it remains rare in the United States.

Where one is most apt to find the breed in the US is with wildlife agencies, state park, and ranger services in Alaska, Colorado, Montana, Nevada, and Washington which use the dogs to control bears. The Wind River Bear Institute, for example, has successfully reduced human-caused bear mortality and conflicts by using the dogs to “school” bears to stay away from human populated areas. The dogs do this through “managed harassment,” check it out:

These dogs are so smart that they can communicate the type of animal they have located just by using a specific bark, but it should be noted that not all KBDs can work bears. Traditional knowledge on the breed indicates that only some 20% of a litter produced from a lineage of brown bear hunting lines will have the ability to safely and effectively “dance” with a bear.

The aforementioned Institute is the Number One source of working KBDs throughout North America and Japan because of their rigorous testing procedures on every litter of puppies they produce from proven lines of bear hunting dogs. It serves no one, not the bear, not the humans, and certainly not the dog to be exposed to a bear conflict situation that can quickly go wrong if a dog unsuited for this kind of work. Sadly, substandard or just plain ignorant KBD breeders have begun marketing their dogs as “bear protection” or “bear deterrents,” a shameless marketing ploy that is both dangerous and irresponsible.

All that said, the breed is recognized by the United Kennel Club (since 1997), by the AKC as an FSS breed, and by the FCI under the name, Karjalankarhukoira. The KBD made its debut as a show dog through the Finnish Kennel Club in Helsinki in 1936, and to this day, as with other native breeds, no Karelian Bear Dog may claim the title of ‘Champion’ unless it has proved its worth as a hunter, and exhibited its physical superiority in the show ring.