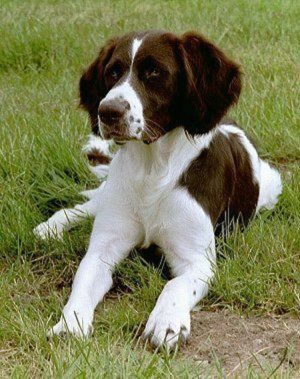 In the northeastern part of the Netherlands is a province situated between Groningen and Friesland (north and northwest), bordered by Overijssel to the south, and by the German state of Lower Saxony to the east.  Drenthe is home to more than 50 megalithic funerary monuments known as hunebedden or graves of the “huns’ which attest to prehistoric settlement of the area. The provice has a long tradition of cottage industries, such as spinning, weaving, and rope making, but agricultural was always the chief economic activity in this beautiful land dotted with peat swamps, heathlands and sand drifts. It is this area that is the original birthplace of the Drentsche Partridge Dog.

Back in the day, few thought much about the pied hunting dog in their midst because few grasped the concept of a breed. It took a long time before anyone thought to get these dogs officially recognized, and as Janny Offereins, Snoek and Diana Striegel-Oskam wrote in their marvelous Amazing Dutch Breeds, Drent fanciers were in no hurry: “The dogs were as they should be…why did a dog need an official pedigree?” Indeed, pedigrees were associated with dogs from other countries, but this mindset changed after WWII.

The Netherlands was neutral during World War I, and it tried to remain so during WWII. It couldn’t. German forces invaded the country on May 10, 1940 as part of Fall Gelb. Holland fell to German control, and the occupation lasted for five years during which time life for the Dutch people was miserable. Dutch attitudes changed, and this included dog owners in Drenthe who now became aware that they owned a rather special regional breed of dog.

When the occupation ended and rebuilding lives commenced, it still took inhabitants from outside Drenthe who started the journey to recognition. An evaluation occurred at the Harmony Society in Groningen in 1943, and despite a bumpy ride on the road to meeting preconditions, one particular remark was made that has never been forgotten, and it’s repeated in Amazing Dutch Breeds: “Show me a single breed of dog containing as much uniformity as present in this collection [of dogs], presented by simple folk.” The Dutch could be – and were – proud, and rightfully so.

In 1943, the Drentsche Partridge Dog was accepted by the Dutch Kennel Club.