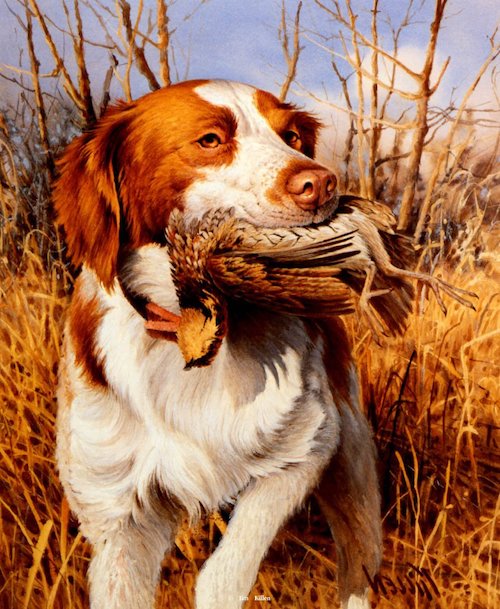 We were a little startled the other when we come across a statement in a book positing that the foremost breed for a falconer to work with is the Brittany. Not to take anything away from the breed, but we suspect we’re in the majority in thinking of the breed as more of a pointing spaniel, and that falconry calls upon breeds more like the Saluki.

We would be wrong. In the UK alone, there are some 2,000 “hawking” dogs today, and most of them are Brittanys, spaniels and pointers.

Long before there were guns used to shoot birds for dinner, flying birds were taken with hawks and falcons. This is a good place to mention that there is a difference between hawking and falconry, and to state the obvious, it has to do with the bird. Falcons, with their long wingspan, hunt from high in the sky. When prey is spotted, they streamline their body by closing their wings and “dive bomb” towards their quarry. If unsuccessful with the first strike, the falcon will pursue the prey with the intensity that Luke Skywalker had when he flew an X-Wing in the attack on the Death Star. Falconry was a sport of kings and aristocrats who were mounted on horseback to follow the action, and the sport was typically done with ritual and ceremony.

Less high brow was hawking. Though the sport had its following among royalty (Henry VIII was passionate about it), it is done on foot which made it more affordable to lower ranked individuals. Hawks have shorter, wider wings, and when they launch after prey, it’s usually directly from the gloved hand of the falconer. Hawks fare better in woodland than falcons, and if there is an operative phrase to describe a hawk’s method, it is “stepping on the gas.” Hawks accelerate when they overtake their prey from a standing start, or negotiate through trees the way a ball does through the playfield of a pinball machine, and they do it with speed.

Whether it’s hawking or falconry, in the end, downed prey has to be found, and both falconry and hawking require the services of a dog that can find it, flush it out,  and retrieve it.  Dogs were, and are, an essential element of both as the bird’s loyalty depends on our ability to produce game for it to chase.The original dogs used for this work were pointing spaniels, and while falconers use a wide range of dogs with their birds, a pointing breed like the Brittany is more versatile on different terrain. A Brittany will hunt all type of game, from hare, pheasant, and partridge to woodcock, grouse, or snipe. The breed is the perfect weight to transport, but its smaller size also enables the dog to go where others won’t fit easily. Perhaps the main advantage a Brittany has over other HPR’s (hunt, point, and retrieve) is its ability and determination to work and flush in extreme cover, such as thick gorse or bramble. And finally, a point we’ve come across frequently is that Brittanys instinctively seem to recognise a hawk as a hunting partner.