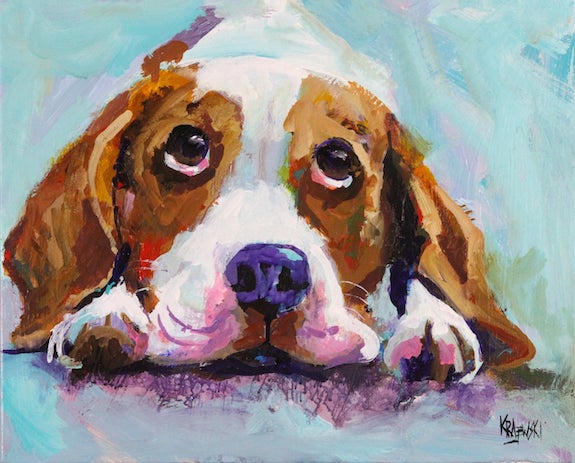 It is believed that the beginning of the modern Beagle could be found in the hunting packs of Parson Honeywood, and you can read more about them here. This post has to do with the breed in America, and frankly, in its early days, Beagles were homely, and perhaps not even sound. Described as mostly white with a few dark markings, these Beagles popular in the antebellum South looked more like straight-legged Bassets or even Dachshunds with weaker heads, undoubtedly the result of early crosses between imported English Beagles and Dachshunds. On the plus side, they were said to be “snappy, tireless hunters full of vim and quick at a turn, but not handsome in outline.”**

The turning point for the breed in America came with the importations of General Richard Rowett. Rowett was a leading political figure of nineteenth-century Illinois, a famous animal breeder in his day, and an officer in the Union Army during the Civil War. Indeed, it was his Beagles who served as models for the first American breed standard that he, L. H. Twadell, and Norman Ellmore drew up in 1887. The dogs he imported brought better heads, body and legs, though it remains unknown from which packs or kennels in the UK he got them. Rowett is credited for establishing a quality bloodline in America. Indeed, Rowett Beagles became known for their hunting prowess, consistency of type, and evenness of markings.

Rowett was not alone in the effort to improve the breed in its early days in America. In approximately the same decade, Mr. Arnold of Providence, Rhode Island imported an entire pack from Royal Rock Beagles from the north of England.  Another notable American breeder and importer of English Beagles during the same time frame was Norman Elmore. He imported ‘Ringwood’ and ‘Countess,’ and Ringwood became the primary stud dog in the development of his Elmore line of Beagles. Well aware of the General Rowett’s breeding program, Elmore collaborated with him in breeding their lines together, and their breedings produced what many believed to be the best Beagles of the time.

Interested in the Beagle? National Purebred Dog Day has over 50 posts on the breed! Just do a search for ‘Beagle’ in our search window at the top.