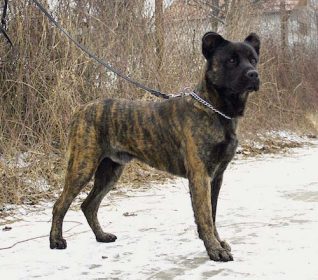 The working dog that walks with a slight waddle is rarely seen outside Azores, Portugal, an archipelago characterized by dramatic landscapes of blue hydrangeas hedgerows, impossibly green pastures, and the kind of fishing villages one tends to see while assembling a jigsaw puzzle. The dog is an Azores Cattle Dog, also known as the Cao Fila de Sao Miguel. Breed purity has been maintained for several hundreds of years, in large part because of the remoteness of the island – and that suits island people just fine.  They’re proud of the dog that’s integral to the old ways and culture, and breeders have strictly controlled sale of their dogs.

As mentioned earlier, these are working dogs, so much so that they’re often born in pastures and remain outside throughout the year herding and guarding cattle.  They’re remarkably agile and are said to move like lightning to “love nip” an errant cow by the leg – but never the udders. These are intelligent dogs who are keenly aware to avoid the udders of a milking cow, but have the wherewithal to get aggressive when dealing with cranky animals.

Interestingly, while the breed is believed to be a descendant of a molosser, it has a square head that resembles a hyena. The comedy ends there. Incredibly muscled rear quarters produce a waddle that vanishes when the dog is after an ill tempered bovine, or a “stranger-danger” intruder.

The Azores Cattle Dog is believed to have existed for over 300 years, but has been documented only since the early 19th century. A breed standard was published in 1984, the same year it was acknowledged by the Clube Portuguese de Canicultur, and in 1995, it was recognized internationally when the standard was published by the FCI.  The Azores Cattle Dog is regarded as a rare breed with only some 3,000 dogs registered worldwide.