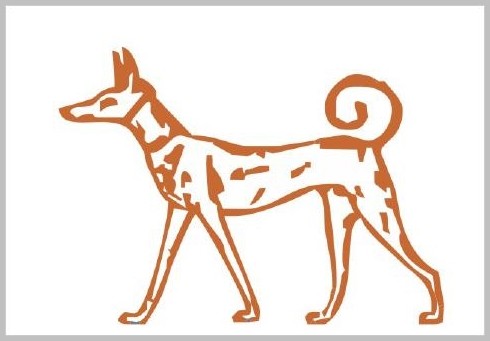 He was a god to his people, the divine ruler of Upper and Lower Egypt, but his heart broke in very human fashion when his dog, “Abuwtiyuw,” died. The King missed the way his sleek, swift hound would sniff the wind, jump to see a gazelle, or race ahead of him during a hunt. Such was the King’s affection for his dog that he decreed that “Abuwtiyuw” be buried in the manner befitting a nobleman, this so that the dog’s “ka” would reach the afterlife as an honored spirt. There, his dog would await him until it was the King’s time to join him.

We suppose it came as a surprise to Dr. George Reisner, an American archaeologist, and the head of the Harvard-Boston Expedition, to unearth a stone inscription tablet in 1935 that described the burial of a dog. Translated, the inscription recording the burial in the fifth dynasty of ancient Egypt read: “The dog which was the guard of his Majesty. Abuwtiyuw is his name. His Majesty ordered that he be buried ceremonially, that he be given a cofﬁn from the royal treasury, ﬁne linen in great quantity, and incense. His Majesty also gave perfumed ointment, and ordered that a tomb be built for him by the gangs of masons. His Majesty did this for him in order that he might be honored before the great god, Anubis.”

“Abuwtiyuw” (also transcribed as Abutiu) was one of the earliest documented domestic animals whose name is known, though the name of the bereaved pharaoh who ordered his elaborate funeral in the Giza Necropolis remains a mystery to us. In addition to finding the inscription, Dr. Reisner also found an inscribed stone listing the gifts donated by the pharaoh for “Abuwtiyuw’s” funeral, indicative of a very high tribute. The tablet is now in the Egyptian Museum in Cairo.

Dog mummies have been discovered in many Egyptian sites (the largest unearthed at Ashkelon in Israel), but Abuwtiyuw’s coffin and remains were never found, nor of any images of him. The tablets’ text, however, characterized the dog as a Ṯsm (Tesem), with erect ears and a tail with a curl.  Many scholars believe that Abuwtiyuw was either a Pharaoh Hound, or Ibizan Hound.

Image of a Tesem

One thought on “What Breed was Abuwtiyuw, One of the First Dogs Whose Name We Know?”