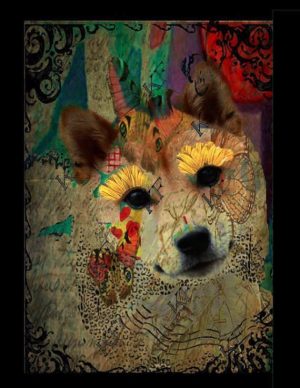 Before World War II, there were three types of 地犬, or Shiba Inu in Japan: The Mino, the San’in, and the Shinshu, each named for the region from where it originated.

The “Mino,” when compared to the modern Shiba, was less refined. It was a rich, deep mahogany color, which, along with the black tipped hairs on the muzzle, back and tail, was reminiscent of “sashige,” or dirty red, but sashige is undesirable in the modern Shiba, plus the Mino lacked “urajiro,” the “undersurface white,” required in a Shiba Inu on the sides of its mouth, cheeks, under the jaw, neck, chest and stomach, and on the fore chest.  It had thick, prick ears, and possessed a sickle tail, rather than the common curled tail found on most modern Shibas.

The San’in, larger than today’s Shiba, was a mottled black color, and it also was without the “urajiro.” The well-defined stop of today’s Shiba was characteristic of the San’in, as was its feistiness and independence. San’ins were known for their lack of affection.

And finally, the Shinshu was smaller and mostly red with thick bristle hair in the outer coat, and a dense soft undercoat, but it tended to have round eyes rather than the preferred triangular inset eyes.

By the end of World War II, the Shiba Inu was nearly wiped out, most having died in bombings or from distemper. They were so close to extinction that the three bloodlines had to be interbred to ensure the survival of the breed. Most of the surviving Shibas were the Shinshu variety, though there were a few Mino and Sanin left. The new co-mingled Shiba caught on quickly, and today is the most popular breed in Japan.