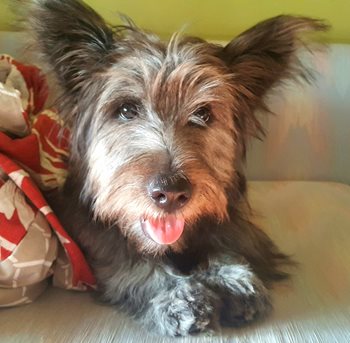 We first met Ian Lynch years ago at the Westminster Kennel Club Dog Show, he, our social media counterpart for the Canadian Kennel Club. We recall his enthusiasm for the dogs (read: the writer, producer and actor was “gaga” over all the breeds), and if memory serves, he especially wanted to lay eyes on a Bedlington Terrier. He got his wish. 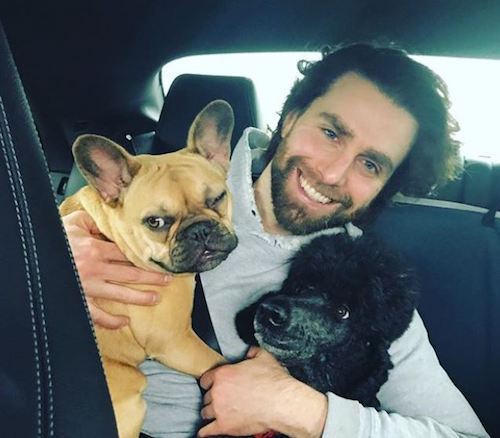 Ian with his dogs

These days, the television and radio personality has added “blogger for the Canadian Kennel Club” to his resume. We tend to run into Ian only at major American shows – which means it’s not nearly often enough – but when we learned that he’d recently gotten a new dog, and a vulnerable breed, at that, we were tickled. Our delight at his new choice of breed was doubled when we learned that he also wrote a piece for the Canadian Kennel Club about the experience which he has graciously allowed us to share here:

Going Rare: The Joys of Owning a Vulnerable Breed 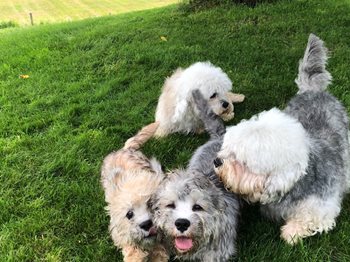 It’s no secret that what’s old is new again. As a millennial, I know that what used to be known as “used clothing” is now “vintage” and all the rage. Many of us have gone back to eating local and embracing a “farm- to- table” mentality when it comes to eating and the use of solar power is giving us renewed hope for a more sustainable future.

With so many of us going back to our roots in various areas of our lives, it is worth remarking that we should also renew our interest in rarer breeds that once enjoyed popularity in days gone by. Dr. Richard Meen said “Purebred dogs are the only living museum of mankind’s journey on Earth”. Sadly, some breeds can no longer tell us how they helped humans with a variety of jobs in the past, as dozens of Canadian Kennel Club recognized breeds are in a vulnerable state and could eventually face extinction if we don’t act to protect them. 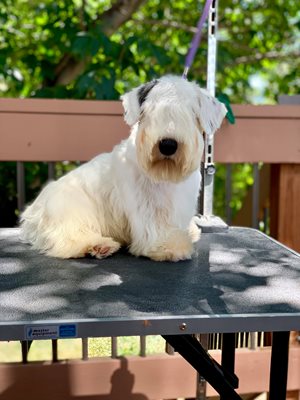 As someone who has always had an interest in history and tradition, I was drawn to owning a rare breed. Growing up I had American Cocker Spaniels, an English Springer Spaniel and a Miniature Poodle. Needless to say, rarely did anyone ask me what kind my dog was as these are all breeds who have enjoyed great popularity for several decades in Canada.

Cut to me as an adult living in Toronto with a Standard Poodle. Measha was 5 when I started seriously considering getting a second dog. I have always loved and will always love Poodles, but also felt drawn to the Hounds and the Terriers. I was assisting a Canine Good Neighbour Testing at Woofstock in 2016 when our booth was located serendipitously next to the Dandie Dinmont Terrier Club of Canada’s booth. I had always loved the unique look of a Dandie, and apart from seeing one on the street ten years prior, had never gotten a chance to interact with one, much less several as I did that day.

I spoke with the President of the club who is an All-Breed Judge and second generation Dandie Dinmont Terrier breeder. I learned more about the breed, the challenges facing their numbers and ended up trading contact information with my new friend.

Throughout the next three years, I kept in touch with that breeder. I attended Scottish breeds festivals, Dandie Cuddling Parlours at the Canadian Pet Expo and their specialty show at Paws Way. Earlier this year, the timing worked out and the right puppy was available for me. I became a Dandie owner, member of the breed club and full time spokesperson for anyone who wants to hear about the breed.

Why so rare?
Every endangered breed has its own reasons for the decline in their popularity.  Often it has to do with the purpose for which the breed was created. When that job is no longer needed, the number for the breed go down.

Take for example the Otterhound. As their name suggests, this member of the Hound Group’s purpose was hunting otters, which used to be popular in England. Otterhounds were bred to be able to follow otters in the rivers, their durable, water repelling coats and webbed feet made this task possible. Otterhounds were already rare, as hunt masters kept the dogs exclusively for themselves until otter hunting was banned in 1978. With the main purpose of this breed outlawed, hunt masters scattered their packs, allowing private owners to purchase the dogs and introduce them into their own families as pets. A few were brought over to North America during this time, and only a few of these dogs are bred. It’s estimated that there are only about four to seven Otterhound litters in North America a year. 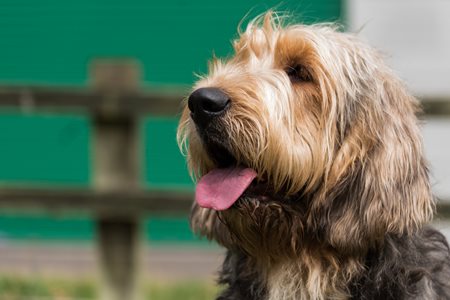 In the case of the Dandie Dinmont Terrier, both World Wars are to blame for their decline. Unlike the other terriers, Scottish, West Highland White and the Fox Terriers, Dandies had not yet spread to other continents when the war broke out. As food was rationed, breeders had to cull their stock and sadly, many Dandies died. When the war ended, the Dandie never really picked up where they left off.

Sometimes a breed’s decline happens when attention is turned towards another breed. The American Water Spaniel was developed and primarily kept in the Great Lakes region of the United States as a hunting assistant that could retrieve on land and in water. They were favoured waterfowl hunters because the American Water Spaniel is small enough to ride in a boat, but is strong enough to bring back a duck or goose. The breed’s numbers started to go down at the beginning of the 20th century, because hunting had become a less common activity, and larger retriever breeds became more popular.

Buying a Rare Breed
It’s a fact that many of our beloved purebred dogs are facing extinction. There are more Giant Pandas in the world than there are Skye Terriers. If you feel called to help out a struggling breed by owning one, loving one and telling your circle and all who you meet about them, then you are a conservationist in my eyes.

Getting in touch with breeders is now easier than ever thanks to the internet and resources like the Canadian Kennel Club’s Puppy List (www.thepuppylist.ca). Searching for a breed club online or checking out a club’s Facebook page is another way to connect with breeders. Once the breeder decides that you would be a good fit as an owner of their breed, you may be put on a wait list as there might not be any puppies currently available. Generally a breeder will keep you up to date on planned breeding and with a bit of luck and patience, the day will come where you get to take your puppy home.

Becoming an Ambassador
Owning a vulnerable breed means you’ll be talking a lot. To people you know, to strangers, to curious neighbours who want to know “what is it?” I get hilarious guesses as to what my Dandie is (“Irish Wolfhound Basset Hound cross?”) and if my neighbour got a quarter for every time someone called his German Pinscher a “baby Doberman”, he would be a very rich man.

The owner of a rare breed has a responsibility to inform anyone who is interested about their breed. My Dandie Leroy even has business cards. I’m serious. My dog’s breeder handed me a stack when I bought him and initially thought it was delightfully ridiculous, however, they have come in so handy that I asked for more when I was recently visiting her! The card has an image of the breed, description and a link to the breed club’s homepage. I would recommend cards for all owners of rare breeds. It always gets a laugh when I hand them out, but if it gets people interested in learning more about Dandies, I am happy to do it.

Fun at Shows
Those looking to take home a win at conformation shows will enjoy competing with a less popular breed. Breeder, writer and judge Allan Reznik explains the appeal of entering the ring with a rare breed “Exhibitors, especially owner-handlers, can have a tough time of it showing a popular breed, or one in which the vast majority of winners are shown by professional handlers. For them, the thought of showing the only entry in the breed and automatically getting into the Group every day can be incredibly exciting. If this is your goal, and you are getting discouraged competing at the breed level, consider a minority breed. You get more time in the ring while helping to give an uncommon breed visibility. That’s win-win in my book.” In mine as well.

Many wonderful dogs are disappearing at an alarming rate. Owning, loving and promoting an endangered breed are major ways you can help prevent the extinction of a major piece of history.

16 thoughts on “Owning an Endangered Breed”