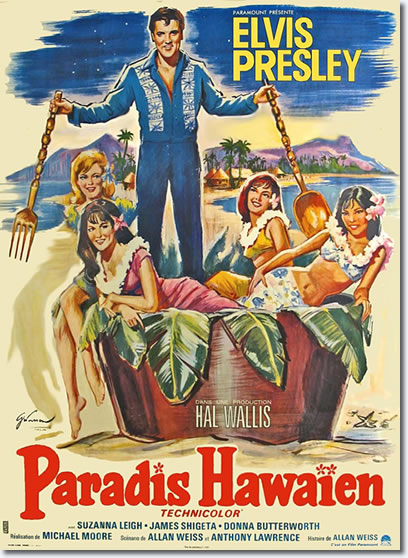 The musical comedy was released in 1966, and while it was his twenty-first film, Paradise, Hawaiian Style was the third (and final) movie that Elvis Presley would film in Hawaii. The plot was pretty simple: Leading man, “Rick,” returns home to Hawaii after losing his job as an airline pilot. He and a pal start a helicopter charter business together, but Rick’s casual flying style (read: reckless), his entanglements with local ladies, and ultimately being grounded by the FAA puts the business and his friend’s home at risk. The rest of the movie provides resolution (and plenty of singing), but there was one scene that caught our eye, and you can see it below (remember, this was the 60s):

As far as we can tell, all the dogs in the cockpit were purebred dogs (can you name them all?),  and while some of us associate Elvis with “Hound Dog,” or the Poodles he gave to his mother, girlfriends, and his wife, Lisa Marie, the Collie in the scene was Elvis’ own dog, Baba.

Unfortunately for the cast and crew, the film was largely panned, and critics called it “all harmless and forgettable,” or the usual “Elvis Presley formula of songs and romance.”  These days, however, we suspect there’s a lot to be said for simple and harmless.