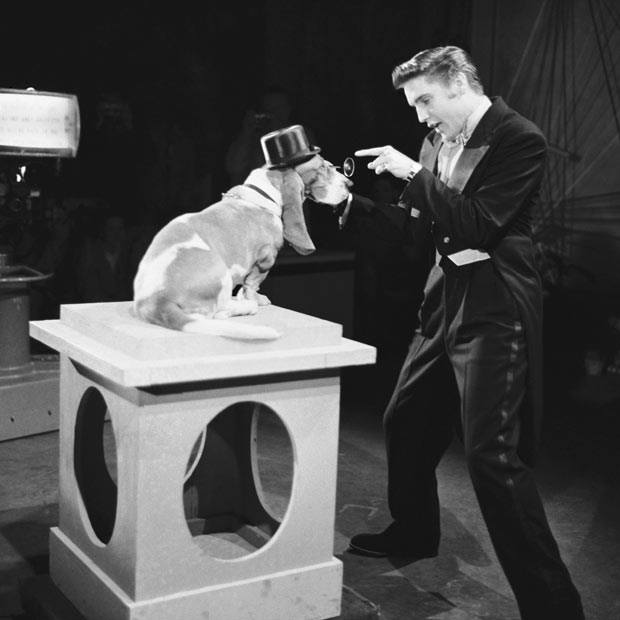 Basset Hounds were, for a time, widely associated with Elvis Presley, probably because of his appearance on The Steve Allen Show in July, 1956 where he sang, “Hound Dog,” to a Basset Hound named, “Sherlock.” While Presley owned many dogs in his life, most with memorable names like, “Baba” “Edmund,” “Sweat Pea,” “Muffin,” “Stuff” and “Getio,” as far as anyone knows, he never owned a hound dog.

Since we’re fond of throwing in throwing in pop trivia to make learning about our purebred dogs a bit more fun, did you know that the first version of “Hound Dog” sold almost two million copies, but it wasn’t sung by Elvis? It was recorded by a 25-year-old African-American rhythm and blues singer named Willie Mae “Big Mama” Thornton, and her version sounded like this.

That said, Elvis deeply regretted that appearance on the Allen Show. It was Presley’s first appearance after his “rocking and rolling and moving all around” gyrations on the Milton Berle show that caused an uproar, and Steve Allen wasn’t about to allow a repeat of that display.  As Jeff Schrembs wrote in his blog, Elvis Presley Expert Blog,  Steve Allen “purposely undermined the talent and stage show presence of Elvis Presley during Elvis’ appearance on the Steve Allen Show (July 1, 1956) by having Elvis appear wearing a black tuxedo outfit (complete with a top hat, white tie, and tails) and singing “Hound Dog” to a Basset Hound. After the show Elvis was FURIOUS at Steve Allen and swore to never do his show again. In later years, when asked about this appearance, Elvis said “it was the most ridiculous appearance I ever did and I regret ever doing it.”

Image of Elvis singing ‘Hound Dog’ on The Steve Allen Show in July, 1956