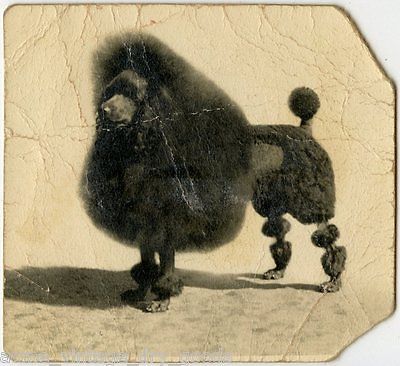 By now, long time readers of NPDD know that there’s a name for everything, and we love sharing them (the more esoteric, the better!).

Poodles, magnificent creatures that they are, come with vocabulary all their own, most of them having to do with grooming. We’re sharing a few terms you may or may not know if you’re not a Poodle owner or show fancier, and we’re using a vintage image found on Pinterest just to be different as we point out a few of the terms.

The curved clipped area on each side of the flank of an English Saddle pattern is called a crescent or kidney patch. 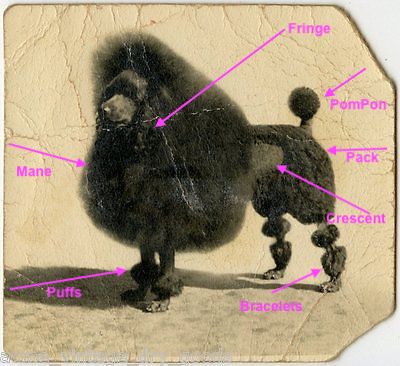 The long profuse hair that covers the neck, shoulder, ribs and chest on a Poodle in an English Saddle Clip is called the mane, while the closely trimmed hindquarters is called the pack or saddle. Feathering, or fringes is what the longer hair on the ears is named, and not shown in the image is the “bloom,” the sheen of a coat in prime condition.  Were this dog in a Continental Clip, the rounded ‘balls’ of hair left over the hips would be called rosettes. As hard as it is to discern that the Poodle in this photograph has one, the long hair on the top of the dog’s head from the occiput to the stop is the topknot. Different clips have different terms, no doubt, but if we’ve missed any in this one, the English Saddle, please let us know!

As for our post title: Poodle + vocabulary = Poodlary, a word we think should exist but doesn’t. Until now.

Image found on Pinterest and happily credit upon receipt of information