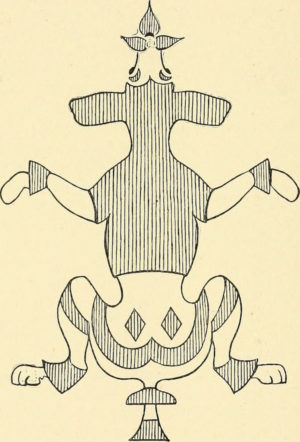 The tools used to groom a Poodle predate the breed by a lot.  Earliest combs were probably the desiccated back bones of big fish, while the earliest man-made combs were found in Egyptian tombs that were over six thousand years old.  Scissors first showed up around 4,000 years ago in Mesopotamia, and in 1762, Frenchman, Jean-Jacques Perret, invented the first safety razor. The marvels that would come to be created in the coats of Poodles with these simple tools…

Clipped Poodles were seen in Medieval illustrated manuscripts. In a painting called, “Patient Griselda” created by Bemardino Pinturicchio in 1490,” a trimmed and clever little Poodle appears. Some believe the first written mention of the Poodle was in 1555 by Conrad Gesner, but an early reference to the trimmed Poodle came in Gervaise Markham’s Hunger’s Prevention or the Whole Arte of Fowling By Water and Lande written in 1621.

Poodles – which were talented retrievers –  were originally trimmed to be kept clean, but also to reduce drag in the water while keeping hair long over joints and vital internal organs. In the 18th century, it became stylish to style and decorate Poodle coats, especially among the aristocracy. Today’s groomer, in a manner of speaking, has his or her genesis in the professional stylists of France in the late 1700s called demoiselles, people who offered their creative services on the streets of Paris and along the banks of the river Seine.  As Shirley Kalstone wrote in her marvelous book, Poodle Clipping and Grooming, “No clip was too outrageous or difficult for them to perfect.”  The author goes on to add that this could include the family crest or coat of arms, monograms, or fleurs-de-lis. To match his or her master, the dog could sport a moustache or Van Dyke beard, or, if the master was a mistress, a pompadour so high, it was nose-bleed worthy. Sometimes the coat was powered, and for extra flourish, it might be sprinkled with colorful confetti.

Subsequent periods saw different trends come and go (we can’t forget the corded Poodle).  In 1874, England’s Kennel Club registered its first Poodle; curly and corded Poodles were not only put in different divisions, but the corded Poodle was shown as a separate and distinct breed because it was so strikingly different in appearance from other Poodles.  Be that as it may, the very first Poodle to earn a championship in England was corded.

Image from Wikimedia Commons, the free media repository. From “The American book of the dog. The origin, development, special characteristics, utility, breeding, training, points of judging, diseases, and kennel management of all breeds of dogs.” Text Appearing After Image: Diagram for clipping Poodle: The coat; the shoulders, breast, and ears should show its cording qualities quite well enough.”