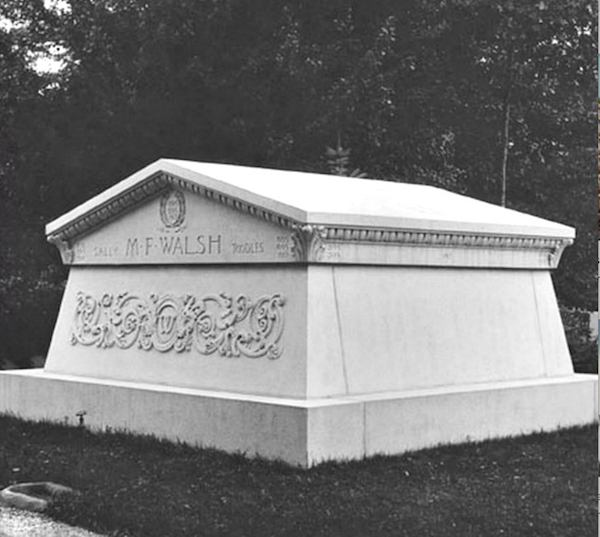 We have little doubt that “Sally” and “Toodles” enjoyed a fine life. The Poodles’ owner, Mrs. M. F. Walsh, wife of a wealthy New York real estate investor, likely lavished affection on them, and though they were out of her reach after they passed on, Mrs. Walsh did not fail them.  In 1924, she paid what in today’s dollar is would be $400,000 for a piece of land in Hartsdale Cemetery, America’s oldest and largest pet cemetery, in order to build a 50-ton Vermont Barre granite burial house for the Poodles. It was not only the cemetery’s first mausoleum, it is believed to have been the country’s first above-ground mausoleum ever built expressly for animals.

During its construction, Mrs. Walsh arrived by limo every morning at seven to oversee its progress, and stayed long after workmen had gone home. The Poodles’ names are inscribed on the outside along with the moving epitaph, “My Little True Love Hearts, Who Would Lick the Hand That Had No Food to Offer.”

Five members of the Walsh family’s pet family would come to be buried there, and they were in good company. The pets of Mariah Carey, Diana Ross, Robert Merrill, Elizabeth Arden, former Mayor Jimmy Walker, band leader Xavier Cugat, and former Vice President James Sherman all have plots at Hartsdale.