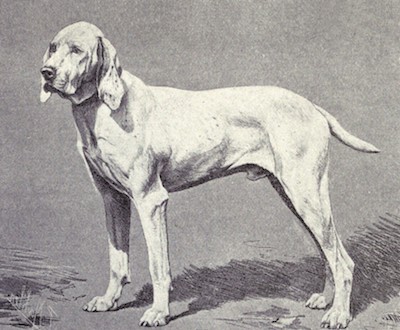 The French term meaning, “pointing dogs” is “braque,” and among them is the Bracque D’Ariege, a breed descended from the old French Braque crossed during the 19th Century with the orange and white Southern Braques. Monsieur de Moteau further modified the breed with crosses to the Braque Saint-Germain and, some believe, possibly the Braque Francais to come up with the largest and most powerful of the French Pointers.

The terrain of the Pyrenees Mountains and foothills is typically difficult for dogs to work as the Pyrenees remains one of the wildest and least developed parts of Western Europe. Naturally, it would also have some of the best hunting in France. Only a robust dog such as the D’Ariege could work for a day in highly challenging terrain – and indeed, relish it.  For its enthusiasm and work ethic, the breed became popular with hunters in the area, but the D’Airiege never seemed to gain as much traction as was needed to keep it safely out of harm’s way should the worst happen.

That almost came in the mid-20th Century when WWI created hardship on man and beast, and the Braque de l’Ariege (also known as the Ariege Pointer) suffered. Many owners living in Vichy France abandoned their dogs when they went off to war, or simply couldn’t afford to feed them. As a result, many dogs died during the War, and had it not been for there being just enough Ariège hunters who bred the dogs over which they hunted, the breed would have vanished. Survival was abetted in 1990 when a team of breeders lead by Alain Deteix worked hard to continue the breed’s survival and eventual revival.  In 2006, the breed was recognized by the United Kennel Club.

Take a look at these dogs at work today: