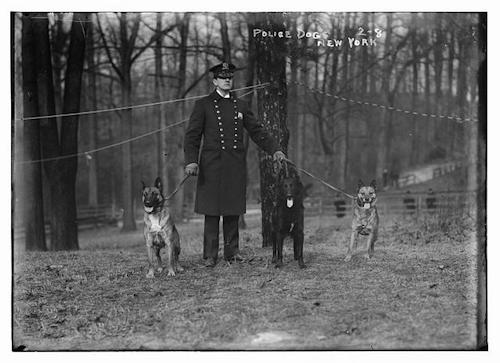 That the Belgian Malinois is an incredible police dog is well known:  75% of dogs used by the Los Angeles Police Department and the U.S. military are Malinois, as are 10 of the 12 dogs used by the Los Angeles County Sheriff’s Department. The breed serves in police departments from Alton, Illinois to Hot Springs, Arkansas, and most officers would agree that the breed is the Porsche of police dogs: “A sporty European import that is light, tireless and so intense the dogs seem to vibrate.”

The Malinois as a police dog, however, is from from a new concept. Around 1899, the Superintendent of the Belgian town of Ghent brought in three Malinois to be police dogs. By year’s end, there were ten, and by 1910, over thirty!  High praise for the dogs expressed in newspapers caused a demand for Belgian Shepherds, and in particular, the Malinois, and many were exported abroad to countries that formed Police dog training societies.

Below is probably one of the best videos about the energy level of a Malinois, and we think it should be required viewing by anyone considering the breed for themselves:

How much energy does a Malinois really have? from Scout Dogs on Vimeo.