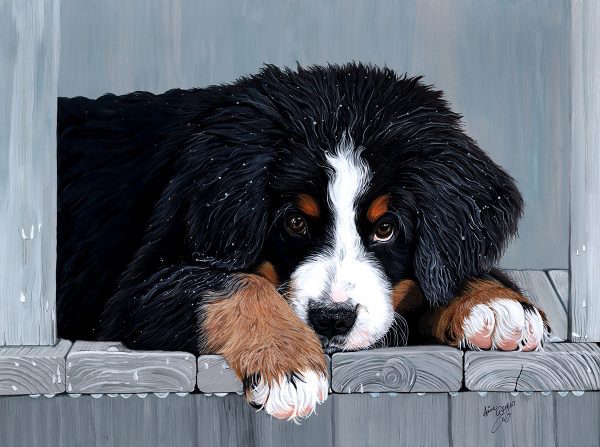 It’s said that the breed’s original name was “durrbachler,” after an inn where these all-purpose farm dogs were bought and sold, but the first time the mountain dogs were referred to as “Bernese” was in 1902, the year an international dog show in Bern offered a class for “Swiss “shepherd dogs” sponsored by a Swiss dog club. It was also the same year that that the Swiss Kennel Club recognized the Bernese Mountain Dog as a unique breed.
The Swiss had wisely recognized three years earlier that their native dog breeds needed protection. For hundreds of years, Berners had been an indispensable helpmate to farmers, dairymen and merchants as they herded cattle, watched over livestock, and pulled carts. By 1888, however, agriculture in Switzerland had dwindled to where only 36% of the Swiss worked in farming and ranching. In 1899, an interest in preserving native breeds lead to breeders of a variety of purebred dogs founding a club called, “Berna,” which put the breed on firmer footing. And aren’t we glad!

“Morning Dew” by Liane Weyers was one of the fabulous entries in National Purebred Dog Day’s 2016 Fine Arts/Poster competition. Click here to see her other wonderful entry, “Other Side of the Fence.”