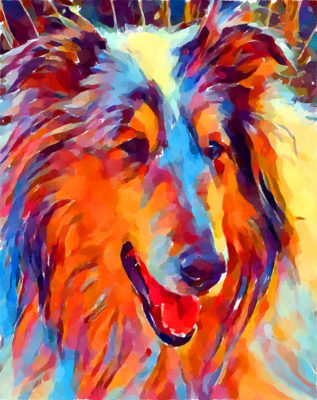 A marvelous line appears in Robert Leighton’s fine book, Dogs and All About Them : “Few dogs possess the fertile, resourceful brain of the Collie.

In part, this can be explain by recent studies that found that brain anatomy varies across dog breeds, and that at least some of this variation can be attributed to selective breeding for particular behaviors like herding, hunting, and guarding livestock. Put another way, shapes and sizes of canine brains vary by breed, and the structures within those brains also are different which helps explain what makes a Pug act like a Pug and not a Border Collie. Speaking of Border Collies, evolutionary biologist, Erin Hecht of Harvard University found that Border collies aren’t born knowing how to herd, they have to learn, but they pick up the skill quickly because their brains come prewired to do so.

Extrapolating from this knowledge makes it suspect, then, that the versatile Collie is prewired for it. The breed not only functions as a herding dog, but was successfully trained for ambulance work on the field of battle by Major Edwin Richardson during WWI. A noted dog fancier of his time, Richardson was the founder of the British War Dog School during the first World War. After working with several breeds, he found that Collies were superb in any activity that entailed seeking out and returning to a given spot; he believed this was due to generations of the sheepdog’s ancestry and being “trained outwards:” Tend after the sheep, but always return to the shepherd.

Richardson once said that the Collie “had reasoning powers that were practically human.” We don’t disagree.

Image: Collie in Watercolor by Chris Butler is available as fine art, and in home decor and lifestyle items here