Some sources would have you believe that Queen Victoria was the first person to show Pomeranians and was responsible for downsizing the breed. As far as we can tell, they are half right.

Thirty years before Her Majesty showed her first Pom in 1891, the breed was already being owned, bred, and/or exhibited by some 200 fanciers, this according to Kennel Club records.  In 1777,  the artist, Thomas Gainsborough, painted a portrait of the adult Pomeranian, “Abel.” It was said to be so realistic that when the portrait was delivered to the house of the dog’s owner, the real “Abel” “flew at her own resemblance with such fury that it was found necessary to place the picture in a situation where it was free from her jealous anger.”  In fact, there is a diary reference to a Pomeranian dating back to November 2, 1764.  An entry from James Boswell reads: “The Frenchman had a Pomeranian dog named Pomer whom he was mighty fond of.” 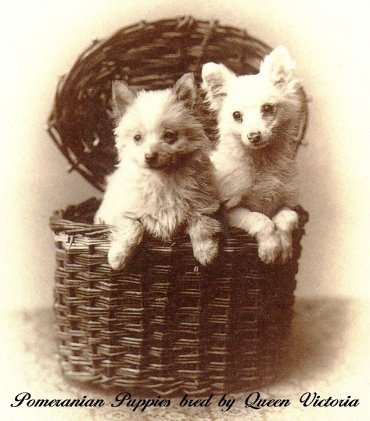 Queen Victoria may have inherited her fondness for the breed from her grandmother, Queen Charlotte. Charlotte was from Mecklenburg, a territory of Germany. After her betrothal to George III, she arrived in England with her own two Pomeranians, “Phoebe” and “Mercury,” dogs she’d purchased back in 1767.

​As for downsizing the breed, Victoria got her foundation dog, “Marco,” in 1888, but two years earlier, there were dog show classes for Poms that weighed less than ten pounds. Still, it’s said that during her reign, the Pomeranian’s average size decreased by 50 percent.  Dog historians have suggested that it was during a trip to Italy in 1888 when the Queen purchased a 12 pound sable red Pomeranian named Marco that inspired the Queen’s desire to breed smaller Pomeranians.

The Pomeranian Club established three years after the Queen got her first Pom changed its classification from over-or-under 10 pounds to over-or-under seven pounds, and encouraged the smaller size known as the Toy Pomeranian. After 1915, the breed became known simply as the Pomeranian with the prefix “toy” being dropped completely.

Today, the standard weight for the breed averages from four to seven pounds, a far cry from Queen Charlotte’s Poms who were believed to weigh around thirty pounds!