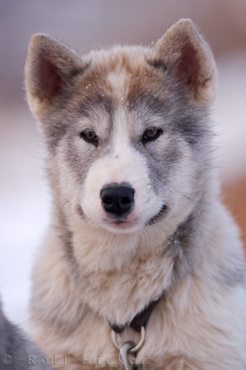 We often hear of dog breeds that were saved from extinction, and here is another one to add to the list: The Canadian Eskimo Dog, one of Canada’s five indigenous dog breeds. Despite having stood at both polar poles and worked with nearly every famous Arctic and Antarctic explorer (a Canadian Eskimo Dog can pull twice its weight through brutal weather and varied terrain with very little nourishment), numbers for this beautiful dog the Inuit called, “Qimmiq,” plummeted in the 1960s. The introduction of the snowmobile, and death from diseases introduced by other breeds that came with population growth in Canada’s north lead to a sad outcome for a breed once so popular that population estimates put breed numbers at over 20,000 dogs. By 1970, less than 200 registered CEDs were left in the world.

Canada is trying. In recent years, the breed has been recognized as one of Canada‘s oldest and most authentic breeds. In 1988, it was honored with a postage stamp, and in 1997, it appeared on the fifty-cent piece. In 2000, it was chosen as the animal symbol of the Nunavut territory in Canada.

The CED was once recognized by the AKC in the first half of the 20th century, but was dropped in 1959 because of the small numbers of registered dogs.The FCI (Fédération Cynologique Internationale) does not accept it, but it is recognized by the Canadian Kennel Club as a member of the Working Dog group, as well as by the UKC in the Northern Breed group.

If you’re considering a new breed for yourself, consider the Canadian Eskimo Dog, but only if it’s a good fit for your lifestyle, and you’re a good match for its needs. There is a breed club in Great Britain, For more information on a breed in need of increased numbers, read this and this. If there are any CED owners reading this, we extend an invitation to have their breed highlighted as a Purebred of Interest, simply contact us here for more information.