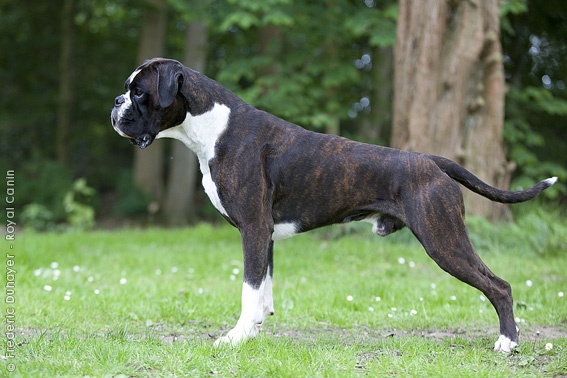 In any breed that includes the brindle marking pattern, such as Whippets, Cardigan Welsh Corgis, Plotts, Frenchies, Irish Wolfhounds, and Boxers, reverse brindling is possible.

A regular brindle pattern occurs when dark stripes appear over a lighter-colored background. In a reverse brindle pattern, however, the prominence of coloring is switched so that light stripes appear to sit on on a dark-colored background (such as fawn brindling on a black background). In actuality, the background hair is still a light or fawn color, but the dark stripes are so prominent that they give the coat an overall darker appearance. In fact, the coloring can almost look solid which gives a dog the appearance of being a dark color. Using the Boxer as an illustration, Boxers that appear black actually have a dark brindle coat, and those “stripes” will be visible upon close inspection. Some people refer to the heavy brindling that produces a dog to be almost black as seal brindling, but this isn’t a standard term, and especially when it’s erroneously referred to as sealed brindling. We’ve also seen the terms, “inverted brindle.”

Reverse brindle breeds, such as the Boxer, are registered as brindles, and we’re told it’s acceptable to refer to Boxers with reverse brindling as having “black” brindles. We also advised to never refer to such a dog as a “black Boxer” because the breed does not carry the gene for a black coat. As an aside, the opposite of the reverse brindle is the “light brindle” which describes a dog having very few brindle stripes.

We always defer to breed experts and invite insights into reverse brindling.

Image of a reverse brindle dog found on Pinterest but credited to Royal Canin and Frederic Dunayer whom we presume shot the photograph.

We love sharing cool stuff with our readers, and in this case, we have a REALLY cool item to pass along, one that is also HOT! Your head will explode (in a good way) when you can see what you can do with one of these. Family made-in-America Cool Dog Trays are FDA approved food-safe, machine-washable, freezer-safe, and microwave-safe molds from which you can make ice cubes, baked goods, soap, and resin art (like Christmas tree lights!) The trays made from silicone sourced in the USA are processed using a cold pour technique.In our view, the best part is that each mold is based on hand-sculpted pieces created by company founder and Great Dane fan, Rebecca. Because these are hand sculpted, there is an attention to bone structure and muscle we haven’t seen in similar products. These are especially obvious when the recipe is for a baked good. It was a four-year odyssey to fine tune the process. Rebecca reached out to China manufacturers, injection mold firms, and vacuum forming companies only to be told repeatedly that handmade sculpture weren’t capable of being recreating for a manufacturing type of scenario.Oh, the joy of proving them wrong. Cool Dog Trays are a complete family operation: Mixing the silicone, printing invoices, shipping and handling, website design, social media updates, and designing and pouring the trays are performed by her young son, and no, you can’t have him, we asked. At present, there are 14 breeds available, and Rebecca is trying to sculpt 7 -15 additional breeds every week. Her goal is to get all AKC breeds done. We asked about the owners of rare breeds who have trouble finding anything in their breed. Rebecca says that she likes to get a commitment of 30 tray orders before she can finalize the process and put them into production, and given the nature of the work, we can see why. This shouldn’t be hard for breed clubs or breed owners who know each other. You can see the available breeds at this link: www.facebook.com/messenger_file/?attachment_id=554852756321561&message_id=mid.%24cAABe0X2NfbSIqn4...We are hoping that by the time National Purebred Dog Day rolls around next May, Cool Dog Tray subscription boxes will be available (and maybe offered as a Photo Challenge prize!)With the holidays coming, the only thing that would limit what you can do with a Cool Dog Tray is your imagination. Halloween and Thanksgiving treats, soaps for gift giving, tree ornaments – or a string of ornaments to hang around a door! Visit her website at cooldogtrays.com and tell her NPDD sent you.
... See MoreSee Less