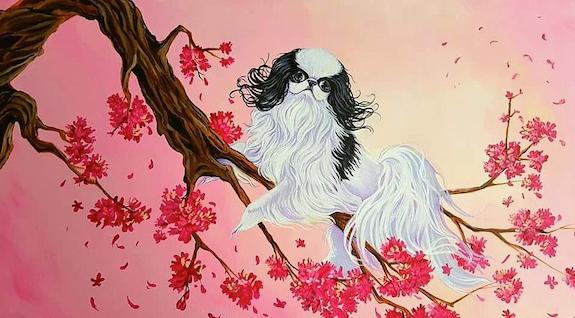 After two centuries of isolation, it was four Japanese Chins, along with rice, dried fish, and a few other goodies that symbolized a thawing of Japanese relations with the west.

The event occurred in 1854 during US Commodore Matthew Perry’s second visit to Japan in less than a year. His mission, in part, was to persuade the Tokugawa shogunate to establish diplomatic ties. The gift of the Chins, which at the time were called Japanese Spaniels, symbolized an opening for cross-cultural interactions. Interestingly, and as an aside, the dogs’ breed wasn’t really Japanese.

The dogs had been imported from China for centuries, and by the middle of the Tokugawa period (17th to mid 19th century), the breed had been bred by the Japanese with such frequency that the breed was now associated with Japan, not China, and was perceived as the “official canine representative of the country.”  The Chins were kept by affluent women of merchant and samurai classes, and according to the British Japanologist, Basil Hall Chamberlain, the Japanese spoke of “dogs and pugs” (inu ya chin) as if the chin wasn’t a dog at all, but a distinct species different from an ordinary dog.  The gift of the Chins to Perry, then, was particularly significant.

Two of the dogs, “Miako” and “Shimoda” went to Queen Victoria, though there is no record of her ever having received them. The other Chins named “Master Sam Spooner” and “Madame Yeddo,” by the sailors who transported them died on the ship during the journey.

Image: “Japanese Chin in Cherry Tree” by Del Del Gonzales is available as fine art, and in lifestyle and home decor items here