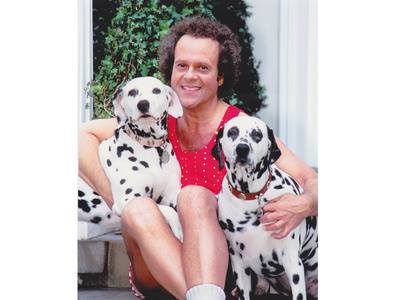 Richard Simmons, exercise guru, and sometimes the butt of snickering, has always shown empathy and great humor; for many people, he’s been a lifeline. Some of us may not know that as an adult, he’s been a devoted Dalmatian owner. When out of town, Richard called his house every night to talk to the dogs and sing to them.

Some of his Dals were named after characters from “Gone With the Wind” (Scarlett, Pittypat, Melanie). “Hattie,” in particular, was Simmons’ constant companion and went everywhere with him, including his Los Angeles exercise studio.

Richard has been out of the public eye for a couple of years now, and it’s rumored that he’s been struggling. “Hattie,” who’d been with him for nearly twenty years, died in 2014, and the loss devastated him. We wish nothing but the best for this good guy.