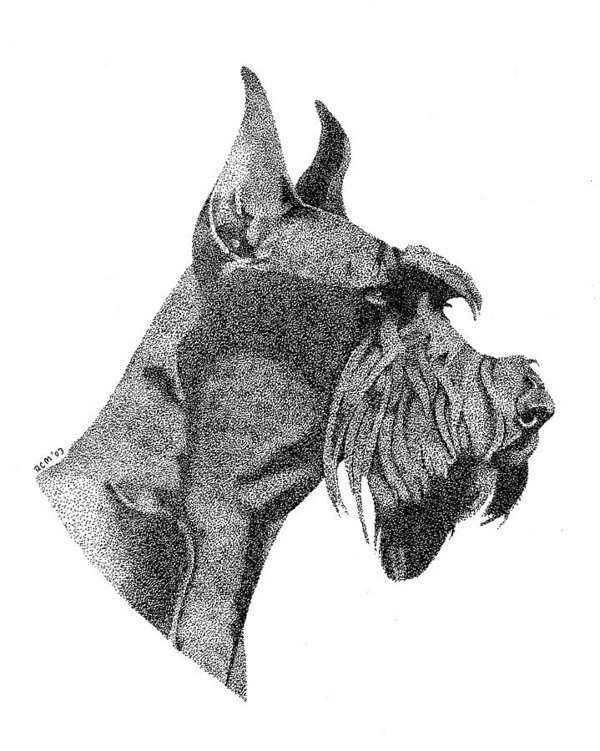 According to one site, the name, “Riesenschnauzer” has many interpretations, and we start with the literal translation which may be divided into two parts:  In German,  “riesen”means giant, herculean, or monster, while “schnauzer” can mean, “walrus mustache.” According to one source, then,  “Riesenschnauzer” means giant, herculean monster with a walrus mustache. We’re a little suspicious that this isn’t entirely accurate since we were under the impression that “schnauze” means nose, and a couple of German speaking friends point out that “Schnauzbart” is the actual term for Walrus Mustache. We’re sharing this anyway for the chuckle it might generate in Giant Schnauzer owners who may already be aware that “Riesenschnauzer” is the name by which the Giant Schnauzer is recognized by the Fédération Cynologique Internationale (FCI)

In the United States,  the breed is supported by the Giant Schnauzer Club of America, parent club to the AKC. There is also the Working Riesenschnauzer Federation organized in 1991. If we understand correctly,  the individuals who organized the federation did so out of a desire to participate in IPO trials and testing (formally known as “Schutzhund”) in order to compete in the US and internationally.

Image: “Teresa’s Grace” by Robert Morin may be purchased as fine art, in lifestyle or home decor items here.