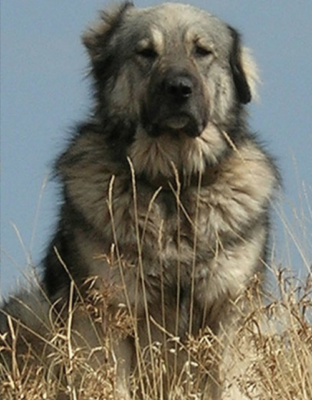 Often mistaken for a different breed, the Hellenikos Poimenikos, or Greek Shepherd,  is very much its own breed, and has been for centuries. Some dog experts believe that hundreds of years ago, Turkish migrants to the foothills of Greece crossed white Balkan Molossers with Turkish Akbash dogs since the breed does have a striking resemblance to the Akbash, and both are found in the same region. Be that as it may, Greek Shepherd Dogs have been an integral part of this part of the world as the breed is perfectly adapted to the natural conditions of mountainous countryside where it once protected sheep and goat herds more than it does today. More on that in a moment.

Traditionally used in two gender pairs, these livestock guardian dogs were spread across all regions in Greece not just because these brave, decisive, working dogs were feared by four legged predators, but also because they were also thought to possess powers of healing and magic.  Parents often entrusted puppies with their children since legend also said that the pups would transfer their strength and health into the souls of the children. You may have noticed that the dog in the photograph has one cropped ear. Owners believed that cropping or completely removing the right ear of male dogs would protect the dogs from evil spirits and improve their hearing. Shoulder shrug. Ancient customs die hard.

Today, the Greek Sheepdog today is very rare and scarcely known breed outside of Greece, and even there, its numbers are declining. It’s not good choice for first time owners, a pity since estimates put fewer than 3,000 dogs left in the world, and the breed can use all the help it can get. With fewer livestock farmers, and fewer purebreds dues to crossbreeding, the non-profit environmental organization founded in 1992, ARCTUROS, took up the breed’s case for preservation with the implementation of the Greek Shepherd Dog Breeding Program. ARCTUROS has been providing the dogs free of charge to livestock breeders in areas that form the habitat of large carnivorous animals.