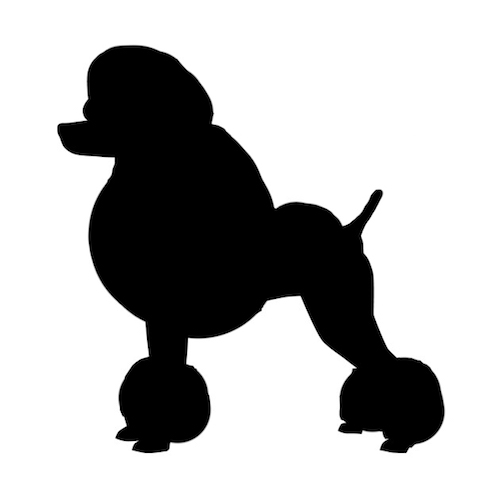 What’s wrong with this picture?

Aside from our poor Photoshop skills and guessing at tail length,  you should have noticed that the Poodle’s tail is missing a pompon.

The presence of a Pompon is not negotiable. The breed’s AKC standard calls for one, and adds that the tail is straight, set high, carried up, and should be docked of sufficient length to insure a balanced outline.

Without a Pompon, the Poodle not only looks out of balance, its silhouette lacks type. Placement of a Pompon on a Poodle’s tail is also far from arbitrary. The individual dog’s tail, itself, determines where that “puff” goes. Tail length, thickness, and where the dog’s tail naturally curves all impact placement of the pompon, and it starts with a correctly done docking. At this point, we will gently advise readers that this post isn’t about the pros and cons of docking, and we would add that the Poodle is a retriever whose tail can suffer any of the injuries that can befall a working sporting dog (and yes, they can work).

Correctly done, about 1/3 of the tail is docked to the point where the tail meets the body, the remaining two-thirds to be shaped with scissors into a pompon, If the tail has been ruined by a poor docking job, however, it’s up to a groomer to figure how how to optically remedy the situation. If the tail has been clipped too short, sometimes a groomer may choose to place the pompon as far out to the end of the tail as possible. Showing more clipped area gives the illusion of a longer tail. Conversely, a tail that is too long can fool the eye if  the amount of clipped area is reduced, and the pompon is positioned around the end of the tail.

After the placement is determined it’s time to shape the pompon which is always round. Some groomers will hold the Poodle’s tail up with a free hand, then comb the hair out toward the tail tip. They may slide their fingers to the end of the tail, then scissor straight across the ends of the hair to remove any ends that are out of place. When the hair is released, the hair around the tip of the tail is somewhat rounded. Others may hold up the tail and fluff out the hair as if it were being back-combed.

Mind you, what you’ve read up to now has been highly simplified. Groomers must account for many other things – including the dog’s structure – to achieve that inimitable Poodle silhouette. Creating this classic look isn’t for sissies!

One thought on “Where, Oh Where, To Put That Pompon”