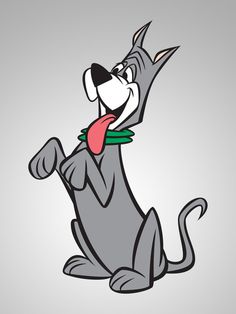 He was the always-happy household dog of the Jetson family (Meet George Jetson…..Jane, his wife) whose green collar matched his boy, Elroy’s, green hat.  He could say a few words, but tended to put “r’s” where they didn’t below (“I love you, George” became “I ruv roo, Reorge”). Who didn’t love to imitate “Astro” as a kid?

Astro may have been cartoon’s first rescue dog, found as he was by the Jetsons who later discovered that he’d belonged to zillionaire, J.P. Gottrockets.  The Hanna-Barbera cartoon debuted in 1962, and hard as it is to believe, the series lasted only one season. It  gained more popularity through Saturday morning repeats, and eventually more episodes were made in the 1980s. The character, Astro,” was designed by Iwao Takamoto, and originally voiced by Don Messick – and, according to FunTrivia.com, quora.com, and 6stardanes.com, Astro was a Great Dane.