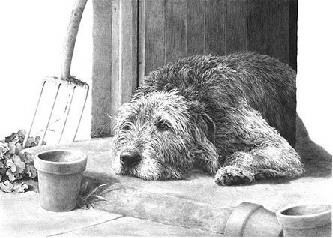 It was St.Patrick’s ability to sooth an angry Irish Wolfhound that persuaded a Druid chieftain to convert to Christianity. This is no easy thing. Druids are not pushovers.

It all started when Patrick was 16 years old. Captured by Irish pirates lead by the warlike king, Niall of the Nine Hostages, Patrick withstood life half naked with only a dog and a few sheep for company as he tended sheep on a mountain called Slemish. For nearly seven years, he endured this life. One night in a dream, his favorite sheepdog appeared as an angel and told him to escape to a ship 200 miles away, a ship from Gaul loaded with Irish Wolfhounds. Patrick listened to his dream and made his way to the ship, wet to the bone, exhausted, and begging to come on board.

And there he stayed mostly ignored until someone noticed that he had a way with the feisty Wolfhounds. It didn’t much matter. The ship crashed on Gaul, and soon everything with a pulse was starving.  Known to be a christian, Patrick was ridiculed by the crew, pagans, all of them,  and challenged him to have his God appear. After a night of prayer, a herd of wild pigs appeared from the forest, and the Wolfhounds were quickly set upon them.

After getting their fill of roasted pork, Cherry Farro Salad with Sweet Vinaigrette, and Balsamic Butternut Squash with Kale, the crewmen converted to Christianity.  We lied about the salad and squash parts.

Patrick eventually returned to Ireland, and his legend continued when he encountered an Irish pagan prince named “Dichu” hunting in the forest with his favorite Irish Wolfhound, “Lauth.”  Having been put on an attack alert, “Lauth,” lunged for Patrick, but the dog went into an immediate down-stay when Patrick muttered a few words, and even licked his outstretched hand. According to Irish folklore, this kindly saint repaid all his doggy pals by allowing the legendary Irish hero, Oissain, to take his hounds to heaven with him.

Image: One of two Companion Prints: At Spinney Cottage by Mike Sibley
http://www.sibleyfineart.com/