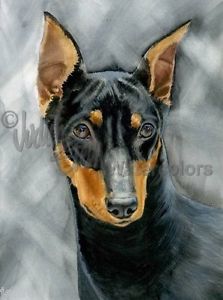 Mention “devotion” in the same sentence as “dog,” and most of us understandably assume that the devotion is on the dog’s part.
Sometimes, however, it refers to a person.  At the end of WW II, Werner Jung searched German farms for any living German Pinscher. It’s not an exaggeration to say that he risked his life to smuggle one German Pinscher bitch into West Germany where he bred her with his larger Miniature Pinschers. In doing this, he resurrected the breed as we know it today, and most modern German Pinschers are related to Jung’s dogs. Surely, this was an act borne of devotion to a breed.
German Pinscher by Judith Stein/
www.judithstein.com
https://www.etsy.com/shop/k9stein