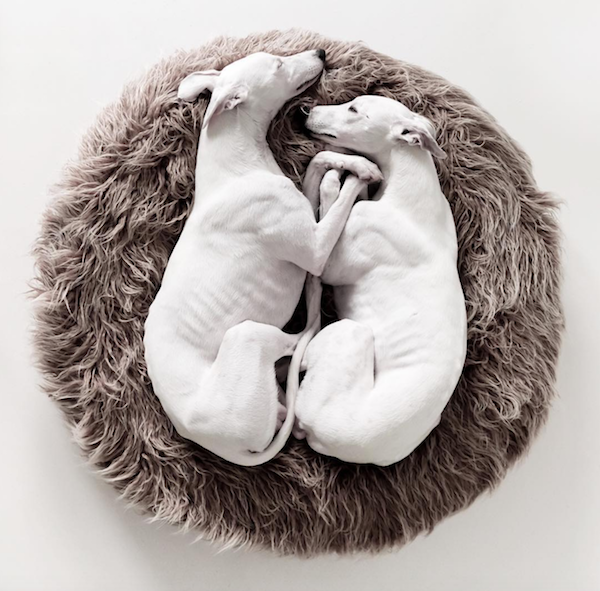 When setting up an Instagram page, one of the first rules of success is to make the page visually pleasing by providing a consistent look.  Exhibit A could be the page belonging to _wand_wand whose two sleek white Whippets, Yōji Miyagi and Viktor, have garnered over 71,000 followers.

The dogs live in Berlin with their owners, Polish born designer and amateur photographer, wandaMAN (“Julia”) and her husband.  Yōgi Miyagi is the older of the two dogs by two years, and his name is a common one for boys in Japan. Viktor, on the other hand, is named after Julia’s grandmother, Wiktoria, possibly because they were born on the same date. The dogs’ color aside, the the Whippets, Julia says, are quite different from each other: One prefers being a couch potato, while the other would be the one moving the couch around the room to try different spots.

Working with the white dogs as if they were a canvas, Julia has said that their sleek physiques remind her of the Japanese hiragana alphabet, but as beautiful as they are, how Julia has photographed them is stunning. Much like another Instagram sensation, the late Paddington, whose owner, Annie Jacob, positioned her Shar-Pei dog against soft, muted colors, Julie’s Instagram palette is rarely anything other than white or black. Her admiration for Japanese aesthetics is evident, and until the boys came along, Julia had no social media account at all.  Now we can all enjoy her work, and marvel that she even makes a dog posing with an poop bag pouch look good, one reason why coop, an LA design studio, recruited the dogs to show off their modern pets products.

We have always encouraged readers to create their own Instagram pages to show off our purebred dogs, and who knows, a beautiful page might get noticed by manufacturers, influencers, and designers. As they say, just do it.