With a membership of 67,959 boys and girls, Junák is the largest educational organization in the Czech Republic, and the country’s largest association for children and youth. Founded in 1911 by Antonín Benjamin Svojsík,  Junák – český skaut was fashioned after the British Scouts, and by 1918, it was proving to be more than something to keep kids busy. Scouts patrolled important buildings and sites, but they became best known for their mail service which delivered official mail in Prague. Their stamps were the first scout stamps in the world and today, these stamps are quite rare and very valuable among philatelists.

By the eve of WWII,  Junák had the third most members of any scout association in Europe, and numbered seventh in the world.  Now, 110 years after its founding, Junák remains a vibrant organization with 2,203 divisions in the Czech Republic. The kids help with seniors, aid pharmacies by picking up and delivering medications and medical supplies, and in this time of Covid,  thousands of boy and girl scouts have sewn and distributed masks, bottled and distributed hand sanitizers, printed protective shields on 3D printers, assembled and distributed them, and delivered groceries and medicine to the elderly.

Early on when it came time to create a logo for the organization, the famous painter, Mikoláš Aleš, created the Czech Scout emblem. On a lily is the head of a Bohemian Shepherd, a legendary symbol of faithfulness and freedom, and the historical symbol of Czech frontiersmen. 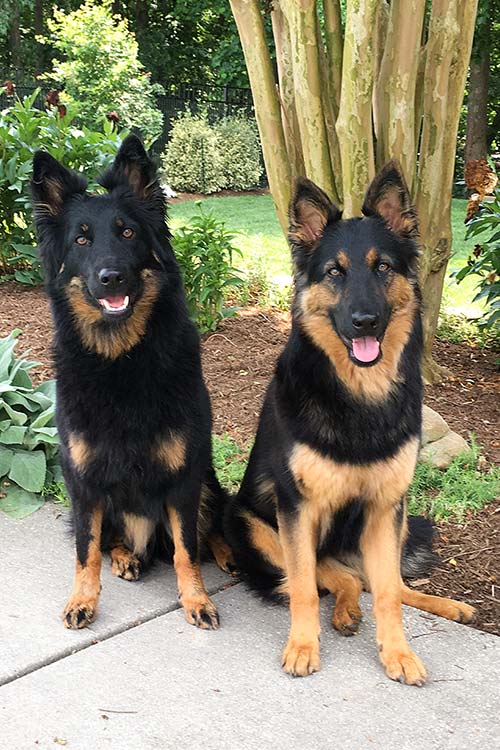 Because the breed guarded Bohemian southwestern borders and homes in the area of the Chod region, it is sometimes called the Chodovian dog. It is registered with the FCI, however, as the Chodský pes, and it’s been known to have existed in Czech lands as far back as the 14th century. This lays waste to the claims by some that the breed is nothing more than a strain of German Shepherd Dog, maybe because a modern breeding program wasn’t started until 1984. There are writings and illustrations that refute this. J.A. Gabriel writing in 1864 described a local people nicknamed “Dogheads” because their flag featured the silhouette of a sheepdog resembling the Bohemian Shepherd. What some have pointed out as more likely is that because of the Chodský pes’ antiquity, it may have been one of the predecessors to the German Shepherd Dog.  About 3500 registered pups were born between 1984–2009 and there’s been no proof to our knowledge that they are related to German Shepherds.

In 2019, the AKC accepted the Bohemian Shepherd as part of its Foundation Stock Service. The image of the two dogs seen above is from their website and is shared with consent.

Image of the scout logo is by Amitchell125 – Own work, Public Domain, https://commons.wikimedia.org/w/index.php?curid=91017540