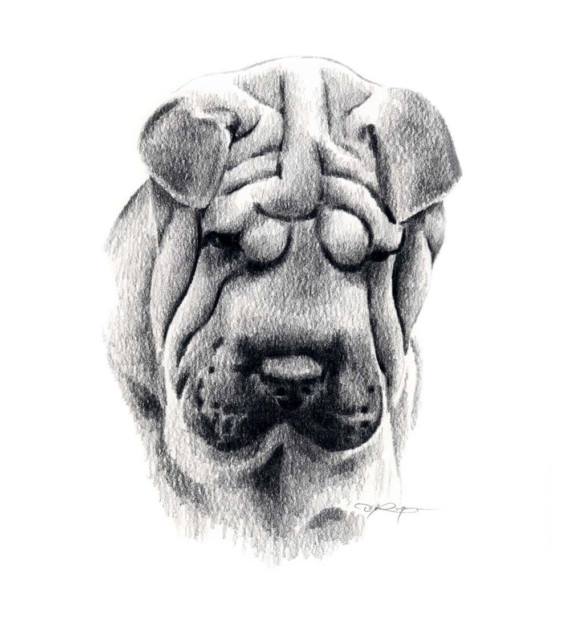 The Chinese Shar-Pei is not just an ancient breed, it is a “basal” breed, a term given to breeds which have far less mixed DNA than more “modern” breeds whose true origins are difficult to ascertain for that reason. Six breeds are regarded as “basal,” and the Shar-Pei is one of them.

The breed is believed to date back at least to the Han Dynasty (c.200 B.C.) as evidenced by fired-clay statues which survive (one such statuette is on display in the Asian Art Museum in San Francisco). The Shar-Pei has its origins in Guangzhou, specifically Tai Li, a small village in Kwangtung Province. It was prized as an all-purpose, general utility dog kept by peasant farmers. For their owners, they protected livestock, served as guardian, companion, and hunting dog when pursuing wild boar (thought at least one Orientalist scholar, Jean Yu, insists that the Shar-Pei’s original quarry was the mongoose based on research of manuscripts). Later, the dogs were introduced to a combat role for the amusement and income of gamblers.

When Chinese Communists came to power, they imposed such an onerous tax on dogs that only the extremely wealthy could afford the luxury of owning dogs as pets. Later, an edict not only declared dogs a “decadent bourgeois luxury,” but banned dog breeding altogether. A wholesale slaughter of all dogs by the thousands put the Shar-Pei on the brink of being lost forever, and by 1950, few of the dogs remained, and then only in isolated villages.

Fanciers from Hong Kong and Macao occasionally came across the odd dog, and some sources maintain that the dogs were rescued from vanishing forever by an energetic Hong Kong dog fancier and businessman, Matgo Law. He happened to come across a May 1971 issue of “DOGS” magazine which carried an article on rare breeds, and included a picture of a Shar Pei described as “possibly the last surviving specimen of the breed.” Fearing that one day, Hong Kong might someday become part of the People’s Republic of China and that the wholesale destruction of dogs would happen all over again, Law appealed to Americans through the same dog magazine to save the breed in 1973. The attention was almost immediate, and couple with the Guinness Book Of World Records listing the Shar-Pei as the world’s rarest dog breed in 1978, and effort to import dogs into the USA and UK was successful.

Interest in the breed increased, and the Chinese Shar Pei Club of America was founded in 1974; The breed was accepted into the AKC’s Miscellaneous in 1988 and accepted into AKC non-sporting in 1992. The breed has rebounded beautifully, and one estimate we saw suggests that breed numbers now exceed over 80,000 dogs.

35 thoughts on “The Chinese-Shar-Pei: A Basal Breed”