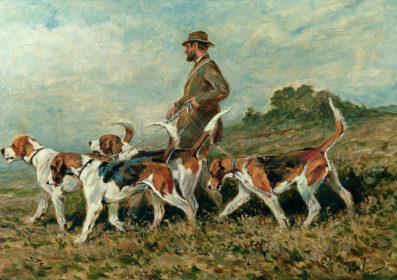 Back in the day, Foxhounds, Beagles, and Harriers, which to the uneducated eye look like different sizes of the same breed, were, in fact, interbred and classified by size and hunting specialization, rather than their lineage. While these dogs shared the same ancestry, they came to be developed for different game, their respective sizes likely influencing their speed. The slower moving “nose-attached-to-a-dog’s-body,” the Beagle, was at one end of the spectrum, while the “hard-running English Foxhound who often overran its nose” (source: AKC) was at the other. In the middle was the Harrier, a slow, sturdy scenthound with exceptional stamina – and, the oldest of the three.

Even today, new owners of a “tall Beagle-looking” dog they got from a shelter or rescue group may suspect they have a Harrier for a Foxhound, but the wonderful Harrier is, sadly, exceedingly scarce: Only only twenty-four puppies from six litters registered with the AKC during the whole of 1999 in the entire United States, this compared to over 19,000 Beagle litters the same year.  The marvelous American Foxhound isn’t any more plentiful. It currently ranks 186 of 193 in the AKC list of Breed Popularity, and the equally wonderful English Foxhound is even further down the list ranking 188 of 193.