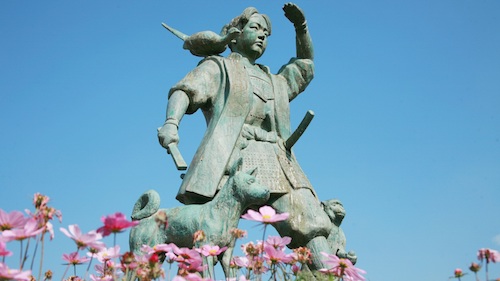 Once upon a time, there was an elderly couple who had always wanted a child of their own. Humble and warm hearted, the peasants had to work very hard to make even a meagre living.

Imagine the surprise of the old woman when one day, a very large peach floated downstream on the river where she was washing her laundry. Snatching the peach, she hurried home with it in her arms, eager to cut it open with her husband to enjoy the juicy fruit. Before they could cut into the peach, however, it split in half and out of it emerged the most beautiful child. Rejoicing at this gift from the gods, they named the child Momotarō (peach boy) and raised him as their own. He grew into a strong young man, but one day, he informed his parents of his plan to visit Demon Island, Onigashima, the place where evil monsters plagued the land and caused havoc to the island’s residents. On his journey, he befriends a talking dog, monkey and a hawk, and together the foursome frighten the Oni monsters so completely that they hand over their treasure and promise never to menace the villagers again.

There are variations of the story thus far, but all them describe Momotarō defeating the Oni, becoming a legend as a result, and then living happily ever after with the old couple. 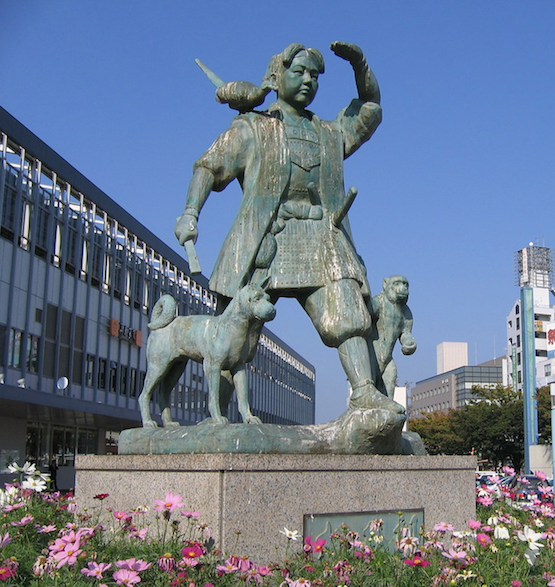 Momotarō is a well-known Japanese folklore hero of justice, his story commonly taught to children in Japan. Motifs of Momotaro are featured everywhere, from statues of his animal travel companions lining up on both sides of Momotaro-odori, to the so-called “Peachbaby” statue near Korakuen Garden. The city of Okayama is very proud of the fact that the folk story stems from their prefecture; Passengers arriving by train at the east exit of JR Okayama Station are greeted by a large statue of the foursome, and you’ll notice that the dog is a clearly Japanese breed; most sources allude to it being a Shiba Inu.