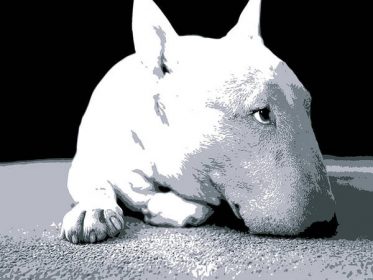 There is no such dog as a pure white Bull Terrier.

There’s nothing like starting a post with a provocative statement, but with a little help from our friends, we are comfortable with letting the statement “lie there.”

All Bull Terriers, even the ones who appear all white, are colored Bull Terriers, which is to say that they carry a color which they pass on to puppies. It could be red or a black on red base coat and a brindle pattern (or not), but they appear to be all white because because they are an “overly marked” piebald, not white, and that is an entirely different gene than white. They may have patches of color (usually on the head near the ears and eyes), but the patches might not be visible.

Today’s white Bull Terrier, then, is the result of a white masking factor that hides the true genetic color of the dog.  Another way to understand this is to think of the white as a marking pattern that covers all or most of the regular color. A careful look at the hairs around the ears of an all white Bull Terrier can help figure out what color the dog is carrying. Real “white” (ee) always masks other colors because those colors are on different loci (K, A, D, B, etc). Piebald breeds have a recessive gene on the S locus series that makes patches of skin/hair not have color (i.e. white), and if the white extends to the eye or ear, it can affect vision or hearing in some breeds. Technically speaking, any patched dog is piebald, not white.

The AKC standard indicates that the breed “is white though markings on the head are permissible,” in which case it is a piebald, not white. One can’t have a partially white dog that is “ee.” it has to be piebald.

Image: “Bull Terrier White on Black by Michael Tompsett is available in various mediums and as a greeting card here