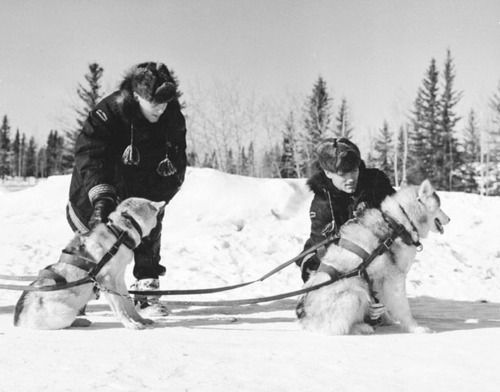 It’s possible that for some people, the term, “sled dog,” conjures up images of the Iditarod Race – and then ends there.  For others, there may be awareness of the use of sled teams in discovering the North and South Poles, and as help mates to the Innuit, but not much more.

But there is more. Sled dogs were used in WWI to pull sleds of bullets, shells and supplies in winter months, other teams moved wounded soldiers to field hospitals. In WWII, the US Army used dog teams to rescue downed airmen. In fact, 209 sled dogs were used in rescue work during the Battle of the Bulge because the Army had discovered the truth of what Roald Amundsen once said of sled dogs: “…[they] can overcome terrain which a tractor can’t penetrate and a plane can’t land on.”  Amundsen had relied on Greenland Dogs to reach the North Pole in 1909, an ancient Arctic breed recognized by the Kennel Club in 1880, and by the United Kennel Club in 1996.

Sled dogs hauled freight and equipment to mining camps during Alaska’s Gold Rush. They delivered mail, and in fact, did so until 1963 when the US Post Office retired the last dog team in Alaska.

From 1873 to 1969, the Royal Canadian Mounted Police also used dog teams to enforce the law, and in the late 1890s, Mounted Police and special constables made dog patrols to deliver the mail between Dawson and Skagway, a distance of about nearly 600 miles. In the winter of 1898-99, the Yukon force traveled a staggering 100,000 kilometres (62,137 miles) carrying over six and a half tons of mail by dog team.

Note: Any post about Canada and sled dogs usually finds at least one comment being made about the dog slaughter that occurred some fifty years ago. It is too large and complex a topic to tackle here, but there are many sources on-line that discuss what occurred. We came across this one.

Image of two members of the Royal Canadian Mounted Police (R.C.M.P.) hitching sled dogs into their harness before going on patrol in 1957 was found on Pinterest and will be happily credited upon receipt of information.

One thought on “The Sled Dog”