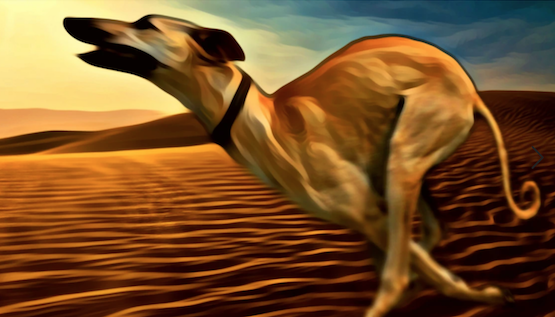 The LGRA, or Large Gazehound Racing Association, offers straight racing events similar to the racing done by Whippets in NAWRA, WRA and CWA. Hounds race 200 yards on a straight, flat track and are graded according to their previous racing experience, or using a weighted average of the dog’s last three race meets. Generally, four dogs compete in each race, though this can change depending on the number of entrants. Dogs are usually boxed at the start just like in pro racing, though sometimes they are hand-slipped. Once released, they chase a drag lure, and the hound that gets to the finish line first wins the race. Simple.

Members of the LGR love the raw speed that sprint racing provides, and because the fastest dog wins, all subjectivity is removed. LGRA races simply focus on raw speed, and hounds aren’t required to manipulate turns or figure out the best time to really turn up their “jets.”

The Sloughi, it’s said, was the inspiration behind the Large Gazehound Racing Association created in 1995, but activities for the breed started earlier when in 1987, a rare breed exhibit sponsored by the Rare Breed Kennel Club (RBKC) was organized in collaboration with the Kennel Club of Beverly Hills. There, a booth was set up with information about the breed, and a red brindle bitch, “Jaaram Nubia” owned by J. McGuffin was probably the first time the breed had been seen by the public.

Though the dogs in the video below are just horsing around, they hint at the power they possess to run like the wind:

Image: Sloughi by Sighthound Art is available for purchase here