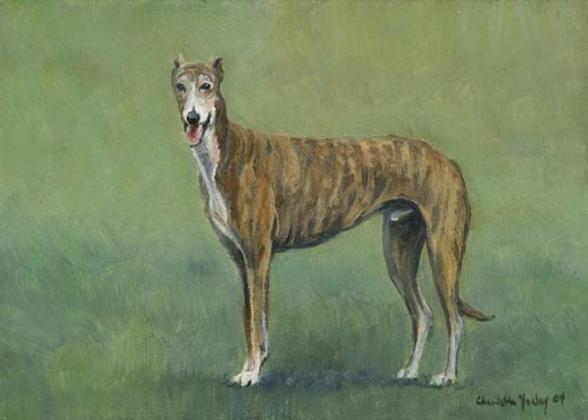 Color and markings in our dogs are an endless source of interest for many of us. It’s ironic (to us, anyway) that the breed with a standard in which “color [is] immaterial” has some of the more interesting aspects to both color and markings.  We’re talking about the Greyhound.

Brindle is a marking pattern that is usually used in conjunction with another color, and in Greyhounds, brindle is one of the recessive genes on the K locus. Stripe width can vary greatly, and it’s not known which genes, if any, are responsible for this variation. There there are some brindles, however, that are so devoid of striping that they appear to be to appear fawn, blue or black, but they breed as brindles. If a Greyhound has only one brindle stripe, it should be still be recorded as a brindle, and not as its basic colour. Indeed, in approximately one in 500 litters where breeders expect brindle and fawn pups not to appear, they’ve reported that there are brindles and/or white and fawn pups; closer inspection, however, reveals that the youngster thought to be a fawn or a white and fawn is actually brindle, or a white and brindle.

Some Greyhounds,  rare indeed, are in the very small minority of genetically brindle pups that are so devoid of striping as to appear fawn, and they are expected to eventually breed as a brindle.

If you have a photograph of such a Greyhound you’re willing to let us share in this post, we’d be delighted to give full credit. For now, we are sharing a lovely piece of art.