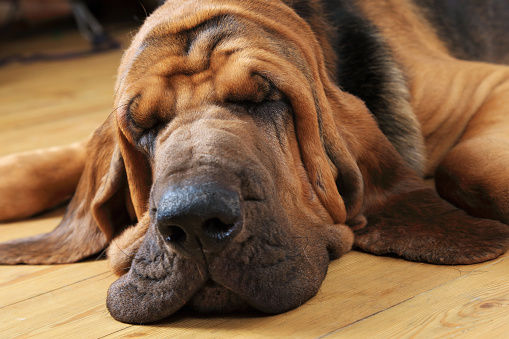 Virtually everything about a Bloodhound’s phenotype is dedicated to helping the hound create an “odor image” (a sort of smell photograph) in the dog’s brain. When the head is carried low, loose, wrinkly skin falls into draping pendulous ridges and folds that trap scent, especially over the forehead and sides of the face. Droopy ears act as “scent sweepers” by dragging the group and sweeping smells toward the dog’s nose. They also serve to prevent wind from scattering nearby skin cells as the dog’s nose is on the ground. Up front, the dog’s lips fall squarely, making a right angle with the upper line of the foreface. Behind, they form deep, hanging flews, and continue into the pendant folds of loose skin about the neck constituting the dewlap which is very pronounced.

Did you know that there’s a name for the folds of wrinkled flesh under the Bloodhound’s lips and neck? It’s called the shawl, and the shaw helps catch stray scent particles in the air or even on a nearby branch as the Bloodhound is scenting, reinforcing the scent in the dog’s memory and nose.

This really is, figuratively speaking, a nose with a dog attached. Researchers have estimated that a Bloodhound’s nose consists of approximately 230 million olfactory cells, or “scent receptors” — 40 times the number in humans.  The surface area of the Bloodhound olfactory epithelium is 59 sq.in. compared to human’s 10 sq.cm.

Circling back to that “odor image,” it works like this: When a Bloodhound sniffs a scent article, air rushes through his or her nasal cavity,  and chemical vapors (odors)  lodge in the mucus and bombard the hound’s scent receptors. Chemical signals are then sent to the olfactory bulb, the part of the brain that analyzes smells, and an “odor image” is created. This “image” is far more detailed than a photograph is for a human. Using the odor image as a reference, the Bloodhound can locate a subject’s trail which is made up of a chemical cocktail of scents including breath, sweat vapor, and skin rafts. Once the bloodhound identifies the trail, it will not divert its attention despite being assailed by a multitude of other odors. Just ask a Bloodhound owner what its like to get their dog to move once s/he’s gotten interested in a scent.  Only when the dog finds the source of the scent or reaches the end of the trail will it relent. So potent is the drive to track, Bloodhounds have been known to stick to a trail for more than 130 miles!