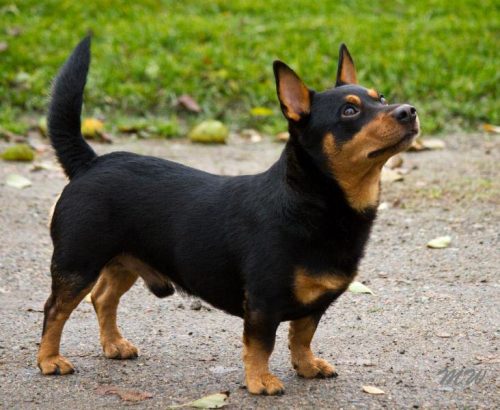 For a rancher and farmer, size is an important consideration when choosing a dog to work their stock, and one certain appeal of the Lancashire Heeler has been its size. While the breed resembles his Corgi cousins (both breeds measure approximately 10½ to 12½ inches at the withers),  a true Lancashire is roughly half the weight of a Corgi leading the breed to be called the “Smallest Drovers in the World.”

Some feel the Heeler was most likely a local variety of corgi or spitz, their evidence being the use of the dog as a butcher’s heeler in Lancashire. Others believe there’s a bit of Manchester Terrier in the Heeler’s ancestry and site the breed’s black-and-tan coloring. What is know with certainty is that the Lancashire has been known in its home county for over a hundred and fifty years, and that cattlemen appreciated a dog short enough to nip at the heels of cattle being driven to market, and agile enough to jump out of the way if a cow should kick. When he wasn’t on the road to the market, Heelers caught rats and rabbits on the farm.

Sadly, the Kennel Club in England put the breed on its vulnerable native breed list in 2006, and this means that annual registration figures for the breed in the UK are under 300 dogs. In 2019, there were a mere 140 registrations, but as bad as that sounds, it’s an actual uptick from the shocking 81 registrations in 2015.

Lancashire Heeler image from the AKC with its kind consent.