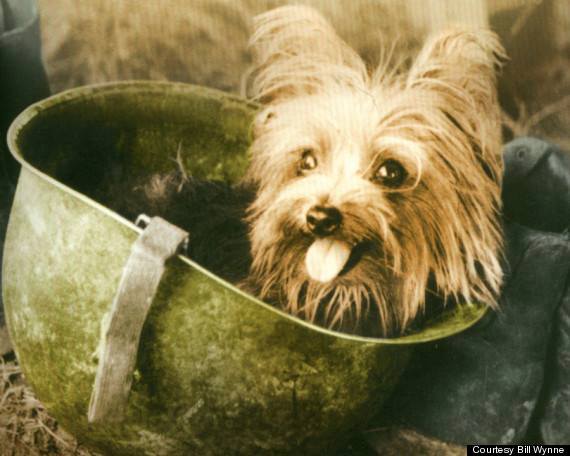 Nearly 60 years after her death at the age of 14, a Yorkshire Terrier named, “Smokey” was honored with Australia’s Royal Society for the Prevention of Cruelty to Animals’ most prestigious animal bravery award, the Purple Cross. Her award was accepted by her 93 year old owner, William Wynne on behalf of the dog whose role with the U.S. Army Air Corp personnel in the Pacific Theater of World War II, was never forgotten.

“Smoky’s” most significant feat occurred in 1945 when the Army Air Corp needed to run communication wires under a 70-foot wide airplane taxiway at an air base in the Philippines. Digging up the airstrip to lay the wires would have taken days and forced American planes to be moved to locations where they would be vulnerable to enemy bombing. Smoky was coaxed into stringing the wire through an underground, eight-inch-wide drainage pipe in two minutes.

Smoky also became one of the first therapy dogs. When Wynne was hospitalized with Dengue fever in New Guinea in 1944, nurses asked if they could bring his dog along with them on rounds to cheer up sick and wounded soldiers. Wynne and Smoky continued therapy work back in the states by visiting veterans in nursing homes, hospitals, and orphanages.

This “angel from a foxhole” did more to generate interest in the Yorkshire Terrier in the mid 1940s than any other single thing. At the time, the breed was solidly in the middle of AKC registration numbers, and then “Smoky” came along and captured the public’s attention.  However improbable, the tiny dog was found in the jungles of New Guinea by an American soldier, then, as the story goes, sold for two Australian pounds to a 21 year old Army Air Corp aerial photographer, William Wynne. His account of the tiny dog who went everywhere he did, shared his C-rations, (and an occasional can of Spam), captured the hearts of Americans who read about her in his book, Yankie Doodle Dandy. Smoky went on to entertain troops, and after World War II, she took on Hollywood, Vaudeville, and pioneer television.

Smoky had a very full life, but died unexpectedly in 1957 at the age of what was guessed to be 14. She was buried in a World War II .30 caliber ammo box in Rocky River Reservation in Lakewood, Ohio.