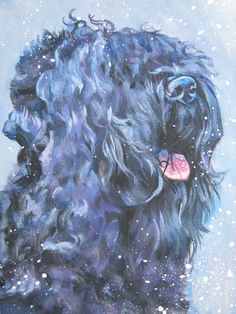 To their owners and breeders, they’re known as “Blackies,” and to admirers, they’re the “Black Pearls of Russia.” They are, of course, Black Russian Terriers, one of the world’s newer breeds. The breed was created after WWII by the Central School of Military Breeding (also known as the Red Star Kennel) that had been founded in 1924 to breed and train military dogs by edict of the Russian Military Council.

Roy was bred with different dams to produce dogs with black coats, but there were many failures that produced faults such as bad bites, cryptorchid and monorchid dogs (incomplete or partially descended testicles), and so forth. In time, experts determined a plan. He was bred to Airedale Terrier bitches with the first litter resulting in 1951. The next step was to cross the Giant Schnauzer was crossed with the Rottweiller. The third step saw the Giant Schnauzer crossed with the Moscow Water Dog, and those hybrids were then crossed among themselves.

It was at the 1954 National Agricultural Exhibition that the Red Star Kennel showed off their results for which they received the coveted Gold Medal and diploma of excellence. In 1957, second and third generation BRT puppies were offered to private buyers and breeders, and this is where heads butted. The Red Star Kennel had created and bred the breed for guard duty and working ability. Private breeders favored more of an emphasis on temperament.

Breeding continued from 1958 to 1979, where trying a “little bit of this and a bit of that” still occurred, but finally in 1979, a standard for the Black Terrier breed was approved by the Red Star kennel. By then over 800 litters and well over 4,000 puppies had been produced, all of whom conformed to the standard.

In the early 1970s, the first Black Terriers were exported to Finland and later spread throughout Europe gaining notice as a Russian rarity.

Today, the Black Russian Terrier has the joyous temperament and energy of the Airedale, the courage, stamina and strength of the Rottweiler and Giant Schnauzer, and the calm of the Newfoundland.