Did you know that Hawaii has no native snakes?  In fact, the last time a snake was found in the state was in 1998, and that one wasn’t welcomed at all.

It was a brown tree snake known to herpetologists as Boiga irregularis. Native to the South Pacific including New Guinea, and Northern Australia, Hawaiian authorities were right to be alarmed when it was found on their soil, and they needed only to look to Guam for why concern was warranted: Brown tree snakes have caused the extinction of nearly every native bird species on Guam. Having not encountered a snake for millions of years, the birds didn’t have time to evolve survival mechanisms.

The snake was unwittingly brought to Guam via military transport from the Solomon Islands in the 1940s. Before the snake arrived, Guam had 12 species of native forest birds. Today, ten of them are extinct, and the other two have fewer than 200 individuals left. They are also responsible for the extinction of three species of lizard.

The snakes have attacked children and pets, caused electrical outages, and people have even woken up with them in their beds. They may also be changing tree distribution because 60 percent to 70 percent of tree species in Guam’s native forests are dispersed by birds. With no natural predators, the snake thrives to the tune of 13,000 snakes per mile square in an island that covers a total of 210 square miles. You can do the math.

Knowing this, then, why on earth did Hawaii purposefully import four of the dangerously invasive snakes last year? 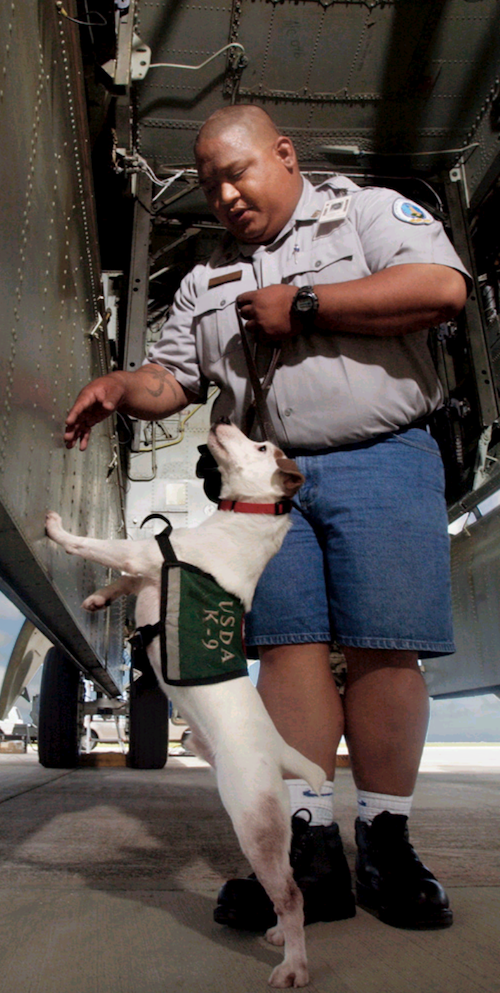 The answer makes sense. The Hawaii Board of Agriculture approved a request for sterile, male snakes to be used in a dog detection program in confined, secured areas. Officials also surgically implanted radio transmitters in the reptiles before they arrived in Hawaii.

The snakes are regularly intercepted in Hawaii airports, and short of completely halting all air travel between Hawaii and Guam, a more viable solution is to use dogs to detect the “stowaways.” Four Jack Russell Terriers (and terrier mixes) were trained to detect snakes entering Hawaii by plane, ship or cargo carrier. The breed is fast, intelligent, energetic, and aggressive towards vermin, and their size makes them easy to handle in cargo and confined spaces. The dogs can cover more ground in less time then an individual person can, and they can smell the snakes whereas a person has great difficulty in spotting a brown snake that blends in.

Hawaii actually had a detection program that began in the 1990s, but the department couldn’t keep enough staff members to keep the program live, however, and stopped importing live snakes after 2002. The effort was discontinued in 2009. The Agriculture Department reinstated the program in 2016, and two years later, the dogs arrived. Funding from the Hawaii Department of Agriculture helped with the Hawaii Detector Dog program, but the U.S. Department of the Interior also announced the release of $2,839,632 million to suppress and control the brown tree snake in areas that included Hawaii. 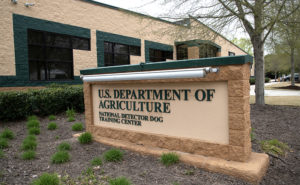 Photo from the United States Department of Agriculture

When the terriers arrived in Guam, they were trained by a US Dept. of Agriculture-certified trainer, and presumably, this was the case in Hawaii as well. That said, the US Department of Agriculture has a National Detector Dog Training Center in Newnan, Georgia where not only Beagles are trained to detect fruits, vegetables, and meats in international passenger baggage entering the United States, but Jack Russell terriers are trained to stop brown tree snakes (Labrador Retrievers are also being trained to detect nutria, an invasive rodent that destroys wetlands on Maryland’s Eastern Shore).

APHIS’ Plant Protection and Quarantine program runs the Center which started in 1984 with just one dog and one trainer. Today, it’s situated on 17 acres with eight buildings and 100 kennels.