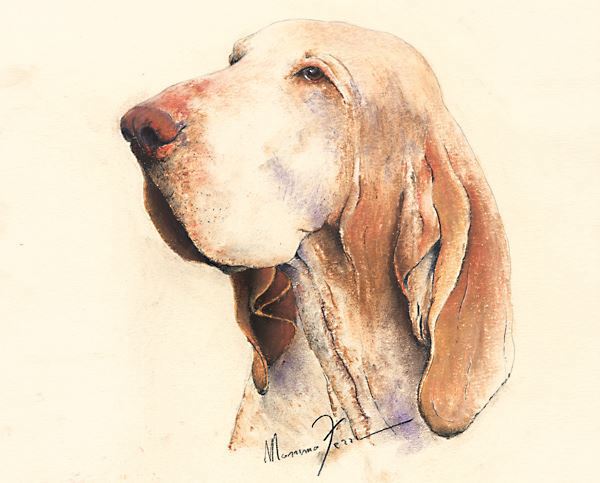 The fabulous Bracco Italiano is one of only two native gun dog breeds of Italy (the other being the equally fabulous Spinone), and they both belong to the Hunt, Point and Retrieve Group, a truly versatile set of dogs used for everything from falconry and deer stalking, to picking-up and rough shooting (also called walked up game shooting). Think: “Swiss Army Knife” versatility.

While the pair have their similarities in some regards, we’ve read that from a hunter’s perspective, the Bracco is best at covering distance, while the Spinone is used in thicker cover and water (largely because of its thicker coat and large paws). In the UK, the Bracco Italiano Club has a strong bond with the Spinone Club of Great Britain and the two often arrange field days together. In this post, we’re focusing on the Bracco.

The Bracco has marvelously pendulous upper lips, and if you watch the Bracco’s face in the video below, you’ll see evidence of the lean and reasonably flat cheeks described in the breed standards as the dog stalks a dove (watch his cheek):

It’s much more difficult to see the Bracco’s face in the video below because of the shaky camera and the angle of the person holding the camera, but it’s still 27 enjoyable seconds of watching a powerful, muscular, and dignified hunting dog in action:

While its exact ancestry is unknown, it is largely accepted that the Bracco Italiano resulted from a romance between a Segugio Italiano (his name was Sergio) and an Asiatic Mastiff (named Sheila), both of which are now extinct.

The Bracco was developed in northern Italy around the fourth or fifth century BC, and has been called the oldest European pointer. The breed was well established by the medieval period and was exported across the Old World by the Italian aristocracy. Many think this exportation lead to new sporting breeds when the dogs were crossed with local ones. The Brittany, German Shorthaired Pointer, English Pointer, and Portuguese Pointer are all thought to be descendants of the Bracco Italiano.

Image from “Il Bracco Italiano arte e storia” by Massimo Ferri & Giuseppe Colombo Manfroni, an illustrated book which tells the story of the Italian Bracco from its origins to today. Find it here.