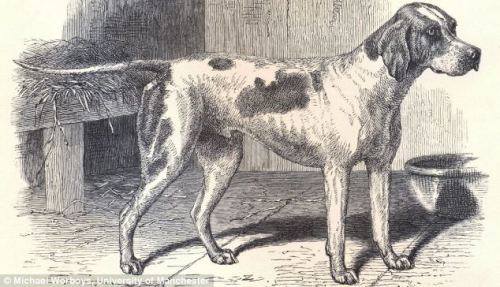 Pointers likely came into use in Spain, Portugal, throughout Eastern Europe and the British Isles around the same time, but most believe that today’s Pointer may have been derived from pointing breeds that entered the British Isles from Spain following the Spanish War of Succession; British officers were so impressed with the wonderful pointing dogs they saw during the nine years spent in Spain that they brought dogs back with them to England. Development of the breed we know today, however, took place in Great Britain.

Early on, Pointers were used in England to hunt and point to hares in the field so that running Greyhounds could locate them and chase them down. By the end of the 1700’s, the Pointer’s type, hunting style and temperament was fairly well-set, and the breed has changed very little since then.

Some cynologists at the University of Manchester even believe that it was a Pointer named, “Major,” who was the first “purebred” dog in the sense we consider it today. They based this on a description of “Major” found in an 1865 edition of the Victorian journal, The Field, which was the first time an effort had been made to define a dog breed standard based on the animal’s physical form. If this is so, “Major” opened a new era of breeding dogs for their form and with their pedigree in mind.

Pointers in America can be traced to the Civil War period, were probably brought to the new world by their owners. The #AKC recognized Pointers in 1884, the United Kennel Club following in the early 1900s. Today, the breed is considered one of the finest bird-hunting dogs in the world.  Show us your Pointers in the comments section below!

17 thoughts on “A Snippet of Pointer History”