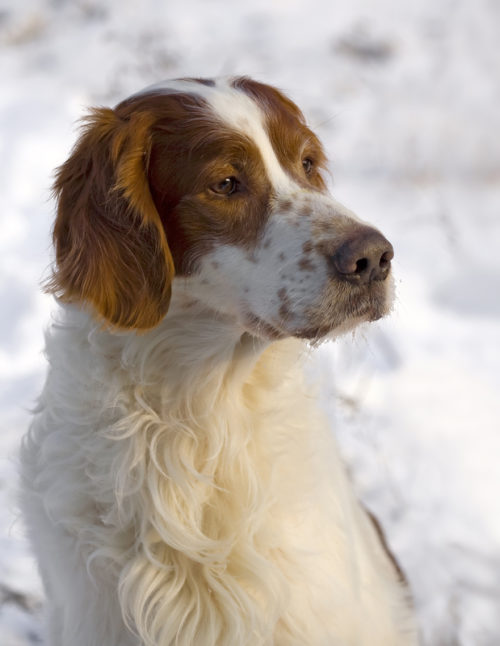 The show judge, Elliot Weiss, once used the device of analogy to describe the differences between the setters by comparing them to bicycles: English Setters are moderate and balanced like an old-fashioned bicycle, Irish setters are lean and racy like a Tour de France racing bike, and Gordon Setters are heavier and sturdier like a mountain bike. This comparison is especially astute when one considers that certain bicycles are best suited for different terrain (just ask someone working in a bike shop if they would recommend pedaling a T-Red Bestianera Montecarlo Edition over an open field).

Another chief distinguishing feature of all four setters breeds is color, and we use this opportunity to explore the Irish Red and White Setter which has a breed standard that is very specific on this point: “The base color is white with solid red patches (clear islands of red color); both colors show the maximum of life and bloom. Flecking but not roaning is permitted around the face and feet and up the foreleg as far as the elbow and up the hind leg as far as the hock. Roaning, flecking and mottling on any other part of the body is objectionable.”

As specific as this is, it’s not helpful to the average person looking at an IRWS for the first time, and wanting to know what is correct in the breed. The first impression should be of a white dog with red patches, and not a red dog with white patches.

Patches should be clearly defined and not run into each other.

A large patch over the dog’s back and extending down each side (essentially looking like a saddle) is called a “horse-blanket,” and it’s wrong. Red stripes running down the legs are wrong, as well. Both ears, however, must always be red.

A flash of white should be present down the dog’s foreface; if it’s too narrow on a puppy, it will only get narrower as an adult, and if it vanishes altogether, it can impact the dog’s expression just as much as too much white can.

A small round mark on the top of the dog’s head about the size of a half dollar is called a “thumbmark,” and in Ireland, it’s highly prized, and as for flecking, a nice smattering (like freckles) can add character!á

Image of a senior Red and White Irish Setter/Dreamstime