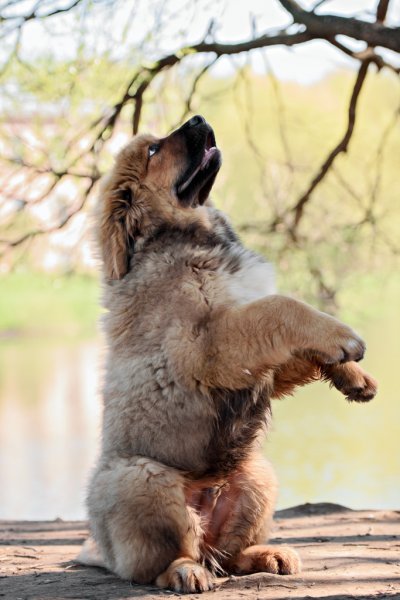 It was Aristotle who described the Tibetan Mastiff as a result of a union between dogs and tigers, and he based his narrative on Alexander the Great’s exploits in the Himalayas during the Indies campaign of 326 BC. Hundreds of years later,  Marco Polo offered what is now a famous quote on the breed: “He has huge dogs, mastiffs as tall as donkeys with a lion-like voice and appearance.”

Stories of the breed are almost mythical, but there is an actual legend in Tibet about Tibetan Mastiffs, and it goes like this:

In the beginning, a terrible flood overtook the earth making rivers unnavigable and the earth saturated. Indeed, the ground sank under an immense wall of water, and many animals died; people who survived suffered terribly from hunger and cold.

There was despair, fear, and anxiety that only worsened each day, but one day, rays of light suddenly radiated from the sky in all directions. In that light, a celestial being sitting astride a supernatural spirit appeared. A new sun illuminated the earth again evaporating all the water, and allowing people to grow wheat and barley, grains that Tibetans still grow, harvest and consume today. The celestial being was the Buddha, the savior of the people of Tibet, and the supernatural spirit was unequivocally the Tibetan Mastiff, known ever since as the “Dog of God,” or Holy Dog.