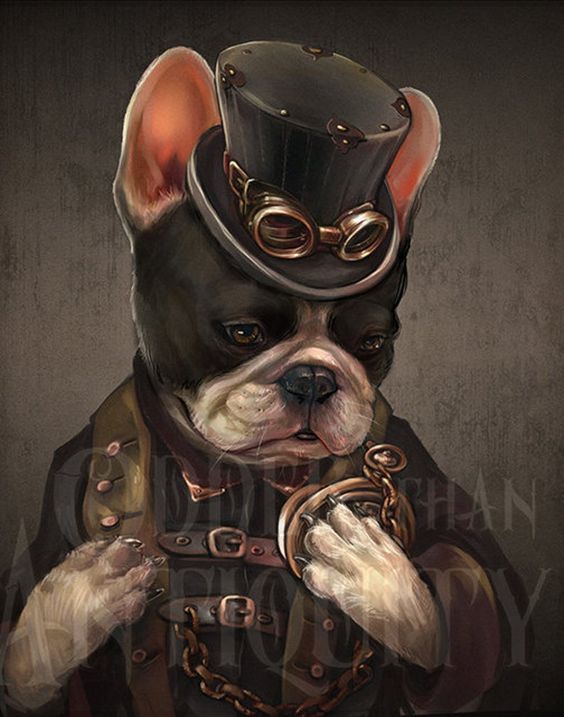 The human imagination is a wondrous thing, and one illustration of that is the steampunk genre of science fiction. In steampunk, modern technology is set in a Victorian era backdrop (think iPads, computers, robotics, and air travel – all powered by steam). In an article that appeared in the HuffPost, writer, William Higham put it this way: [Steampunk] “can be seen as a way of giving your personal technology a goth make-over. Imagine a top of the range computer pimped out to look like an old typewriter, or an iPhone dock that lets you answer your phone using an old brass and wood receiver.” It’s really quite creative.

The concept isn’t new;  to those “in the know,” it’s been around for years. The term itself is thought to have been coined by writer, Kevin Jeter, as a way of characterizing the way he and fellow “tetro-tech” writers wrote, and it grew into a robust visual genre. Some say it even has spawned its own philosophy having to do with mixing the old with the new. As fiction author, Caitlin Kittredge, put it: “It’s sort of Victorian-industrial, but with more whimsy and fewer orphans…”

The first steampunk convention took place in 2006, and the word was actually added to The Oxford English Dictionary a few years later. Staging and costuming is creative, especially around Halloween, and so is the art that steampunk inspires – and this brings us to steampunk dogs. Talk about a robust subculture! 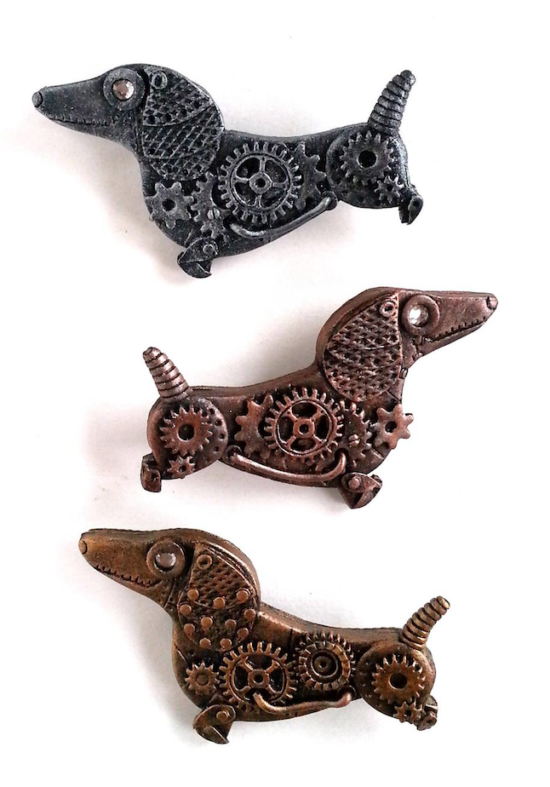 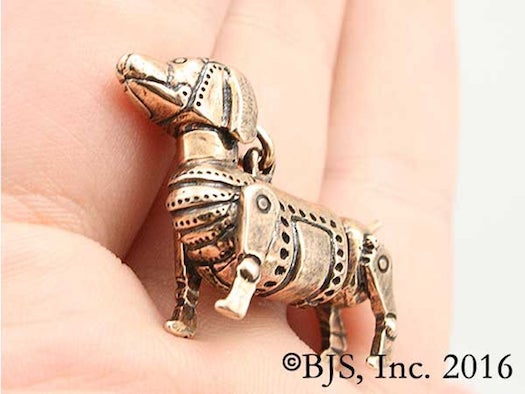 A bracelet pendant by Bumbersnoot Pendant 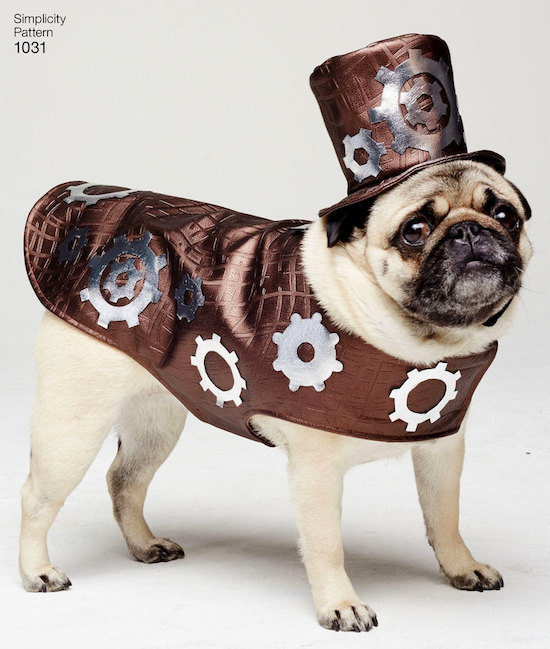 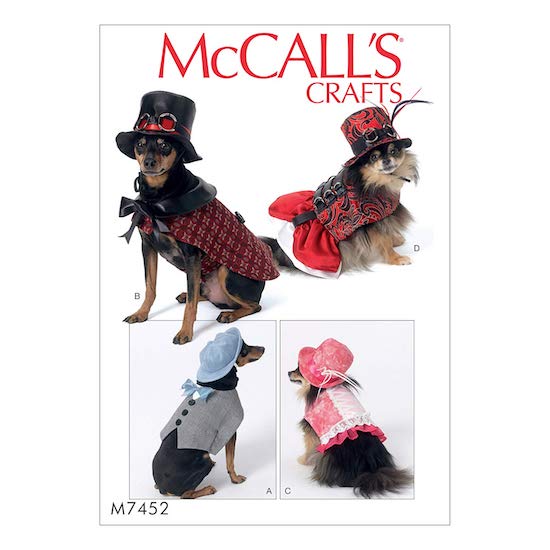 Make your own with a McCalls pattern…. 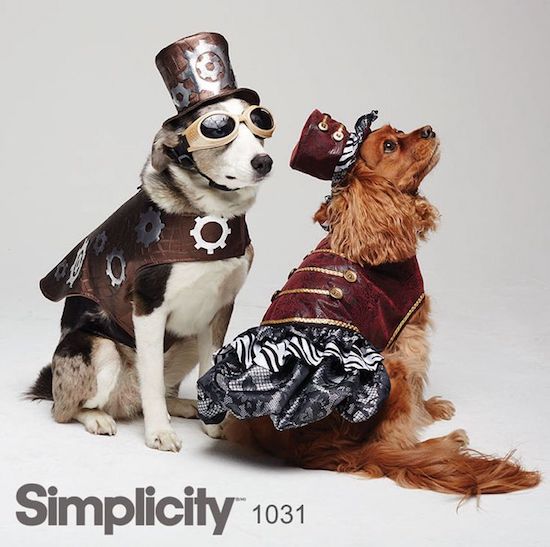 This one is by Simplicity 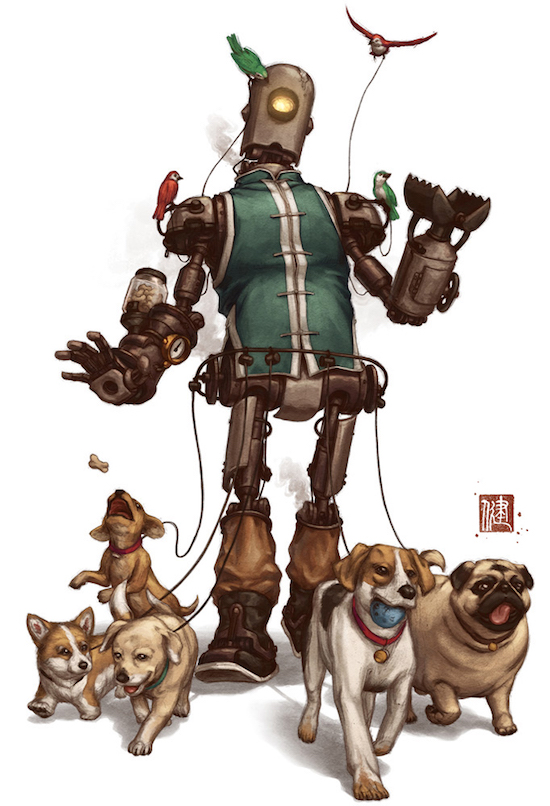 Steampunk Pet Walker by James Ng who writes: “The Petwalker Bot is armed with a treat dispenser and a clockwork scooper to keep the dogs happy. Unfortunately, the technology is not advanced enough to intercept the falling debris from the pet birds, which often land on the walker’s head.” See more of his fabulous steampunk creations here. 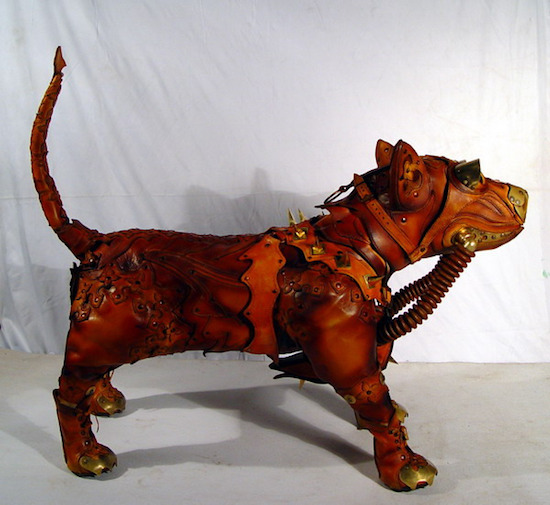 In the words of the artist, Bob Basset, “At the beginning it was suppose to be a dog mask for a magazine cover, but the dog was strictly against putting it on so I had to create a leather dog-model to wear the mask.” 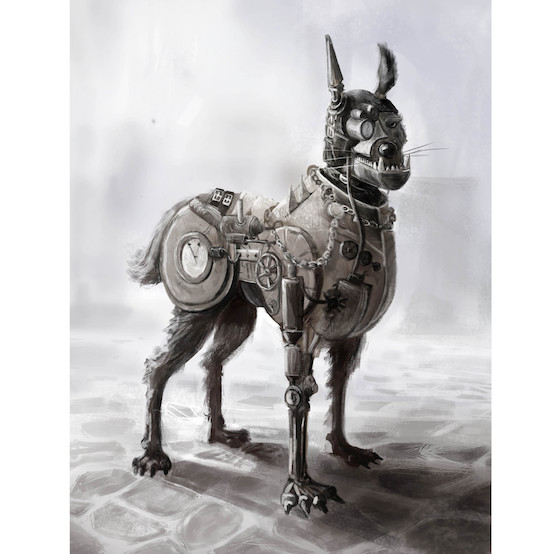 Sketch by By Ehsan Taebloo 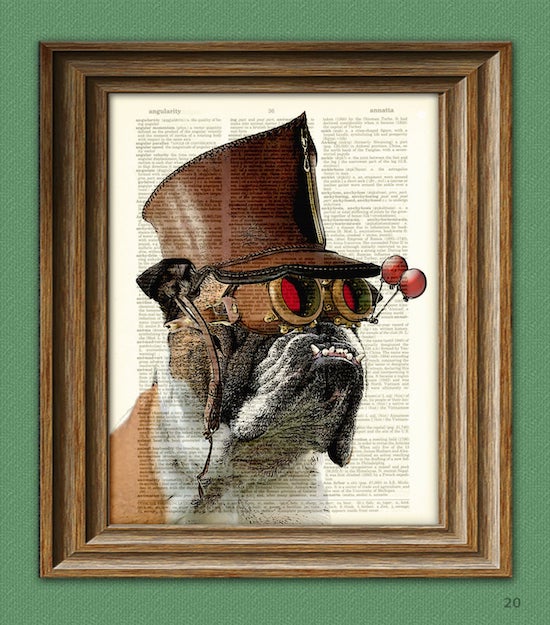 Steampunk doesn’t seem to be going away. The first episode of the latest season of Brokenwood Mysteries (found on AcornTV) is set in a Steampunk convention.

It’s hard to stop when there are steampunk buttons, notebooks, accessories, furniture, clothing, and more,  but we have to stop somewhere, and it will be to share information about our image at the top. It is called, “Emerson, the French Bulldog Gentleman,” by Miss Tak at OdderThanAntiquity. Her series also includes another Frenchie, and a Boston Terrier.